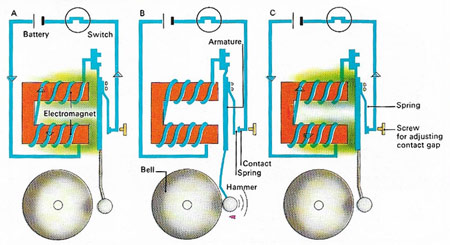 In an electric bell, the magnetic field of an electromagnet is effectively turned on and off rapidly to make a hammer strike the bell. Pressing the switch (A) allows current from a battery to energize the magnet, pulling over a spring-loaded armature and with it the hammer (B). This action also breaks the circuit at a point contact and turns off the electromagnet. The armature springs back, re-makes the circuit (C) and the whole sequence is repeated.

An electric bell is an audible warning device in which a small clapper is made to vibrate rapidly against a resonant metal gong. This is usually achieved by using a direct-current electromagnet to attract the clapper arm toward the gong, while a make-and-break contact cuts off the current just before the clapper strikes, so that the spring-loaded clapper arm recoils – remaking the circuit and commencing another cycle. In the single-action bell, there is no repeater mechanism.