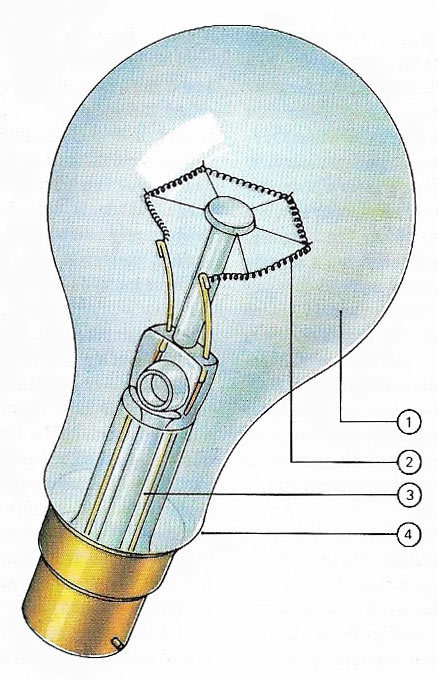 Heat generated by the passage of an electric current is the source of light in a filament or incandescent light (or lamp). Because it is enclosed in a vacuum or inert gas (1), the filament (2) cannot oxidize when the current passes through, causing it to become hot. It is made of a tungsten alloy, combining mechanical and thermal strength. Though it is extremely thin, it glows white hot when enough current passes through it. It is supported on two glass columns (3) through which the connecting wires pass. The whole assembly is enclosed in a thin glass envelope (4). Only about two per cent of the electrical energy is converted into light.

An electric light is an artificial light produced by a flow of electricity through a wire or a gas. In an ordinary light bulb, light is produced by incandescence when a filament, such as tungsten-alloy wire, is heated by an electric current. In a fluorescent tube, the electric current passes through a gas. The gas atoms give off invisible ultraviolet rays. These strike a coating on the inside of the tube, causing it to emit light by fluorescence.


Invention of the light bulb

The first electric light bulb was designed by the British scientist Joseph Wilson Swan. Starting in 1848, he used a carbon filament inside an evacuated glass envelope and by 1860, some 20 years earlier than Thomas Edison, he had produced a workable bulb, though with a short lifetime. His bulbs were used to light the House of Commons in 1881 and the British Museum in 1882.

The Greeks and Romans used lamps made of metal, usually bronze, as well as of pottery. Here you see tow Roman lamps. One has a single wick, the other has three.

In medieval times oil lamps, candles, and rush lights were used. Rush lights, shown on the left of the picture, were made by dipping the pith of rushes into melted wax.

Candles and torches in elaborate metal holders were used to light up churches, and the rooms and halls in the houses and palaces of rich people, from the fifteenth to the eighteenth centuries.

Late in the eighteenth century the first gas lights appeared. The gas burnt at an open jet with a smoky yellow flame. A glass shielded it from droughts.

With the discovery of mineral oil in the United States in the middle of the nineteenth century, lamps which burned paraffin became popular. They were brighter and cleaner than earlier oil lamps.

The electric arc, discovered by Davy in 1800, gave a very bright light. Electric arc-lamps like that illustrated were used during the mid-nineteenth century.

The efficiency of gas lighting was greatly improved by the invention of the gas mantle in the 1880s. This was a mesh tube made of rare metal oxides which glowed white-hot when heated.

Experimental filament lamps were made as early as 1841. Between 1877 and 1880 Swan and Edison each developed a successful electric light in which the filament was made from a thread of carbon.

The electric-light bulb has a filament of tungsten in the shape of a tiny coil. The bulb itself is filled with an inert, or inactive, gas such as argon.

Electric discharge tubes called 'neon lights' began to be used for advertising in about 1920. In these tubes light is given out by a gas in the tube which glows when a high-voltage current passes.

Fluorescent discharge tubes are coated on the inside of the glass with a chemical which fluoresces and shines through a glass tube.