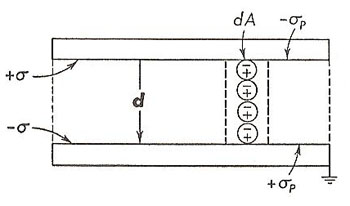 Consequently, in keeping with the definition of polarization,

For isotropic dielectrics (those whose electrical properties are identical in all directions), the polarization that occurs under the action of an electric field has the same direction as the field. Also, the degree of polarization is a function of the strength of the field. This dependence is expressed as

where χe, the electric susceptibility of the material, is a dimensionless quantity. For most isotropic dielectrics χe is constant except for very strong fields.

For anisotropic dielectrics, P and E are normally not parallel. Although their relationship is still expressed by the final equation above, the susceptibility is no longer a scalar, as for isotropic materials, but is instead a tensor.