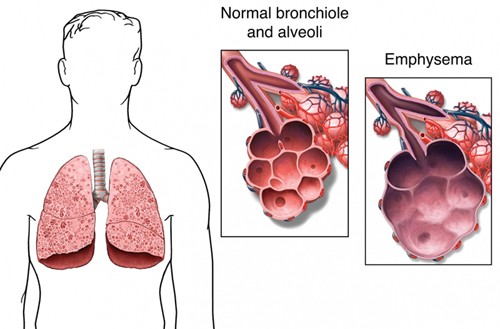 Emphysema is a condition in which the alveoli (tiny air sacs) of the lungs become enlarged, due to destruction of their walls. Often associated with chronic bronchitis, emphysema causes shortness of breath and in severe cases can lead to respiratory failure or heart failure.

Emphysema is usually a result of cigarette smoking. Atmospheric pollution is sometimes a predisposing factor. It can also be a complication of the inherited condition known as alpha-1 antitrypsin deficiency.

Tobacco smoke and other air pollutants are believed to cause emphysema by provoking the release of chemicals within the alveoli that damage the alveolar walls. Alpha-1 antitrypsin is thought to protect against this chemical damage; hence, people with a deficiency of this substance are particularly at risk. The damage is slight at first, but in heavy smokers it becomes progressively worse, with the alveoli bursting and blending to form fewer, larger sacs with less surface area, and with consequent impairment of oxygen and carbon dioxide exchange. Over the years the lungs become less and less elastic, which further reduces their efficiency.

Eventually – sometimes are many years – the level of oxygen in the blood starts to fall, with either of two effects. In some cases pulmonary arterial hypertension (raised blood pressure in the pulmonary artery) develops leading to cor pulmonale (enlargement and strain on the right side of the heart) and, subsequently, edema (accumulation of fluid in the tissues), particularly in the lower legs. Other sufferers are able to compensate for oxygen deficiency to some extent by breathing faster. Why individuals react in one and not the other of these different ways is not known.

Initially, and for a considerable time in mild cases, there may be no symptoms, but as the disease progresses it results in an increasing shortness of breath. At first this may be noticed only when climbing stairs or steep inclines, but gradually it becomes more severe until eventually it occurs after only light exercise or is present even at rest.

A sign of emphysema is a barrel-shaped chest associated with air being trapped in the outer part of the lungs. There may also be a chronic cough (caused by accompanying bronchitis) and a slight wheeze.

As the disease progresses, sufferers in whom cor pulmonale develops start to turn blue due to oxygen deficiency in the blood and their legs swell because of edema are commonly known as blue bloaters. Those who breathe rapidly and retain normal coloring are called pink puffers. Many people, however, show signs somewhere between these two extremes. As respiratory and/or heart failure develops, sufferers find it increasingly difficult to breathe.

The diagnosis is made from the patient's symptoms and signs, from a chest examination, and from various tests. A blue sample from an artery may be analyzed to measure the concentration of blood gases (oxygen and carbon dioxide). A venous blood sample may be analyzed to determine whether the disease is due to alpha-1 antitrypsin deficiency. Chest X-rays are taken to exclude the possibility of another lung disease being responsible for the symptoms and to determine how great an area of the lungs has been affected. Lung function tests are carried out to assess breathing capacity and the efficiency of the alveoli in exchanging gases.

Because emphysema is incurable – lung tissue that has been damaged cannot be replaced – treatment can only control the disease. The patient must completely stop smoking to prevent further lung damage. Efficiency of remaining lung tissue may be improved in various ways. Bronchodilator drugs are given to widen the bronchioles. These drugs can be taken by means of a hand-held aerosol inhaler or an electrically operated nebulizer that produces a fine spray. Occasionally, corticosteroid drugs, taken by inhaler to reduce inflammation in the lungs, are also beneficial.

To treat edema, diuretic drugs may be given to reduce the volume of fluid in the body by promoting output through increased urine production.

If the oxygen level of the blood falls considerably, oxygen therapy may be needed. Oxygen equipment may be available for use at home.

The course of the disease depends on how far it has progressed before the patient gives up smoking. If extensive areas of lung have been damaged or if cor pulmonale has developed, death occurs sooner or later from respiratory and/or heart failure.