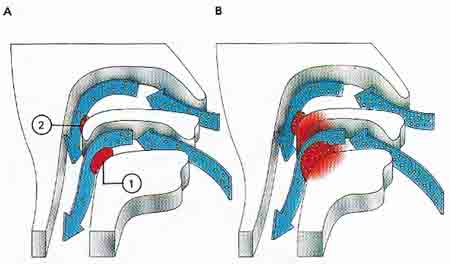 Fig 1. Air breathed in through the mouth and nose (A) carries with it viruses and bacteria. The tonsils (1) at the back of the mouth and the adenoids (2) in a child are part of the body's defences against potentially infective microbes. These organisms may lead to inflammation of the tonsils with painful swelling (B), an increased temperature and difficulty in swallowing. The infection may require antibiotic treatment. 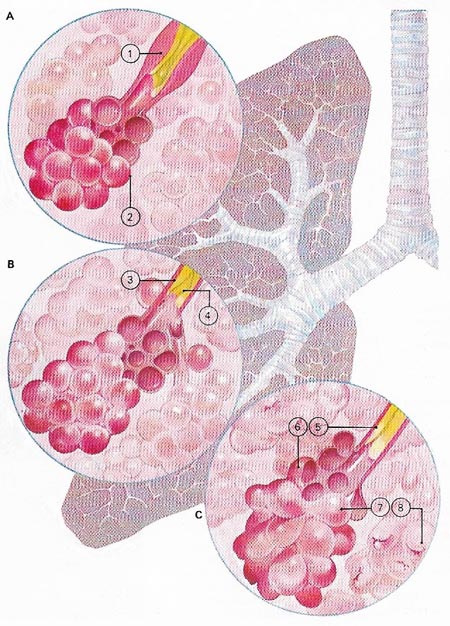 Fig 2. Viruses in the air pass down to trachea (windpipe) into the lung tubes (bronchi) where they may cause asthma, acute tracheitis and bronchitis and symptoms of cough and fever. In asthma (A) the small air tubes become excessively marrow (1) causing difficulty in breathing. The alveoli overfill (2) but the condition is generally intermittent. Chronic inflammation of the tubes – called chronic bronchitis (B) – occur mainly in older men who work in industrial areas and who smoke. A winter cough and wheezing occur, worsened by viral infections. The inflamed lining of the bronchial tubes (3) produces excess mucus (4) which is coughed up as phlegm. Inflammation and narrowing of the bronchi (5) lead to difficulty in moving air into and out of the alveoli (6). The distended alveoli (7) are damaged and some may collapse (8). The condition, called emphysema (C), stops oxygen getting into the blood normally. 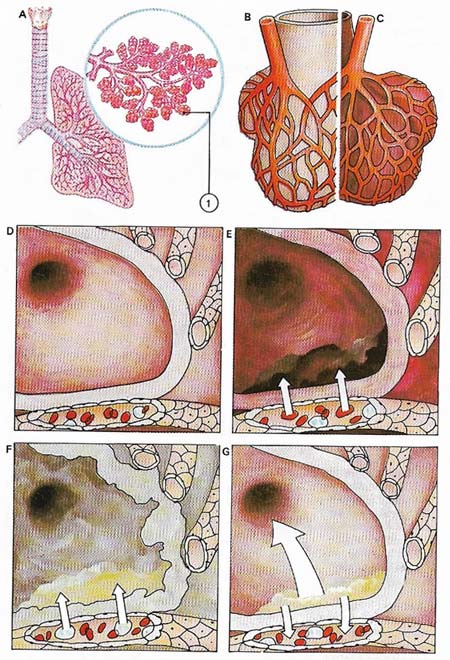 Fig 3. Infection may not affect only the upper respiratory system and the lung tubes (A), but also the lung tissue and alveoli (1), resulting in pneumonia. This is normally an acute infection by invading bacteria but may also be caused by viruses. Normal lung alveoli (B) become engorged with blood, inflamed and thickened (C). Sections through the alveoli seen under the microscope show the stages of the disease. Compared to the normal lung (D), tissue in a pneumonic lung (E) becomes inflamed and the alveoli are invaded by plasma and red and white corpuscles. These form a viscous mass that coagulates, causing acute congestion and airlessness. As the disease progresses (F) some tissue may die and excess of white corpuscles gives the lungs a grey appearance. During the patient's recovery (G) the dead bacteria, fluid and inflammatory cells are either coughed up or reabsorbed into the bloodstream. Treating the patient with antibiotics speeds recovery, while physiotherapy, by helping to ease breathing and by encouraging the coughing up of infected phlegm, minimises permanent lung damage. 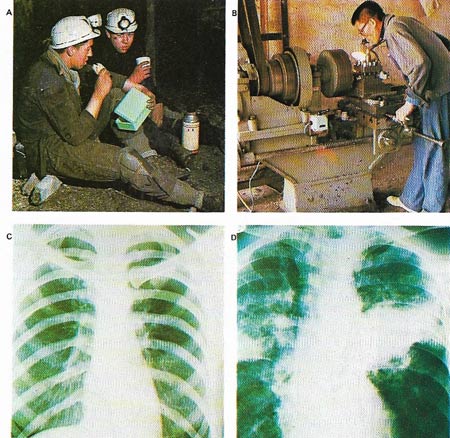 Fig 4. Industrial dusts can cause damage to the lungs, industries whose workers may be particularly at risk are coal mining (A) – and those in which fine silica particles occur in the air – granite and sandstone industries, the pottery industry and metal-grinding processes (B). In the early stages there are no signs or symptoms but gradually breathlessness, a cough and phlegm develop. The dust causes inflammation and scarring of the lungs and X-ray appearance changes from the normal (C) to one with patchy mottling and scarring in the lungs (D). Smoking speeds lung damage. Industrial dust removal is an important preventive. 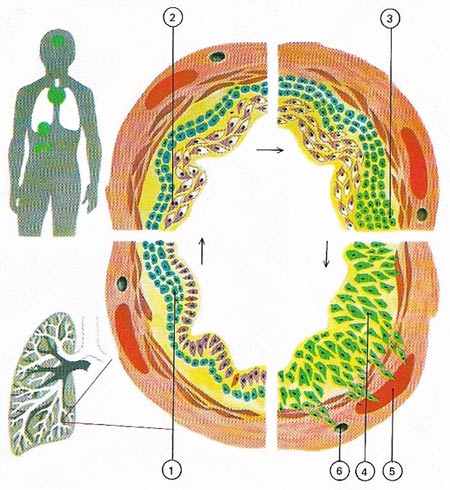 Fig 5. Lung cancer most commonly affects smokers. Cancers develop from cells that alter their structure and multiply more rapidly. Changes may occur in cells of the inner or outer lining of the bronchial tubes (1). Altered malignant cells increase in numbers (2) and extend locally (3) or invade adjacent tissue (4). In addition to cancerous cells may spread outside the lung either through blood vessels (5) or through the lymphatic system (6).

The agents that infect the respiratory passages and the lungs are basically similar to those that cause disease in other systems. Ports of entry into the body for food, water or air – the mouth and nose – are also potential sites of weakness in the body's defences. The lining of the respiratory passages is especially vulnerable to various infections caused by invading microorganisms.

The tonsils and adenoids are prominent parts of the lymph system in the throat and help repel infection. Invasion by viruses or bacteria may result in sufficient inflammation to give tonsillitis in which the throat and neck become sore and swallowing is painful (Fig 1). Many similar viruses of the rhinovirus group can affect the throat, nose and eyes to give the common cold. Infections of the respiratory passages are named according to the part most affected – larynx (laryngitis), throat (pharyngitis), trachea (tracheitis) and bronchi (bronchitis) (Fig 2).

When lung tissue itself becomes infected pneumonia develops (Fig 3). Various bacteria can invade the lung air sacs causing inflammation, increasing blood flow to damaged tissue and preventing oxygen from entering the blood in sufficient amounts. Toxins, poisonous substances produced by the microbes, further affect the patient. Before the development of antibiotics recovery from pneumonia depended on the ability of the patient's own defences to fight the illness and mortality was high. Today the administration of appropriate antibiotics means quicker recovery, providing that pneumonia is not secondary to another serious debilitating disease.

Other bacterial infections of the lung tissues may not initially be as dramatic. Tuberculosis, once known as "consumption", may develop slowly before becoming obvious. Many children appear to come into contact with the disease and rapidly develop immunity. With careful treatment a cure can be expected with the drugs now available. Tuberculosis is more likely to occur in people not in the best of health – the elderly, those with chronic chest disease such as bronchitis and emphysema and in people with poor general nutrition such as chronic alcoholics. The first symptom of a lung disorder is usually interference with breathing. This may take the form of pain, breathlessness, phlegm, or catarrh. The breathlessness may appear suddenly or slowly, sometimes during rest or sometimes only on exertion.


Irritants of the passages

Two lung diseases, bronchitis and emphysema, impede the passage of air to and from the lungs (Fig 2). In bronchitis the blockage is often due to the accumulation of excessive mucus; in emphysema to the compression and collapse of air tubes caused by unnaturally distended lung air sacs or alveoli in which the air has become trapped. Chronic bronchitis is caused by continual irritation of the bronchial mucosa often due to tobacco smoke, dust and fumes.

It is not surprising that, as the years pass, diseases of the lungs develop, for the respiratory system suffers a considerable degree of abuse. This may take the form of large quantities of fine dust particles that are present in all air, but are often worse in industrial areas. The lining of the nose, which is equipped with mucus-secreting cells and long hairs, efficiently traps and filters most dust. Not everyone breathes through the nose, but the mouth and upper air passages are also quite efficient traps.

Lung disease can often be traced to a particular irritant; certain industrial processes produce silica particles that are a particular menace because they reach the alveoli in sufficient amounts to set up, over a period of time, chronic inflammation and scarring (Fig 4). This greatly reduces lung function and increases the risk of lung cancer (Fig 5). Other hazards are forms of asbestos, which, when breathed in, increase the risk of cancer of the large air tubes (bronchi). These are also the major cause of a cancer of the pleura – the lining of the lungs and the chest wall. Restriction of the use of such substances, and removal and prevention of coal-dust and silica-containing dusts, are important medical preventive measures.

Other inhalants may produce allergic responses. In the summer months grass pollens, for example, produce hay fever whose symptoms are streaming noses and eyes, asthma and general ill health is some people. Allergic responses can occur under conditions of prolonged exposure to a highly concentrated foreign material. Thus farmers may suffer asthmatic-type reactions when filling or emptying silos.