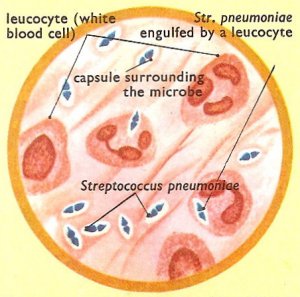 Streptococcus pneumoniae in phlegm from a patient with pneumonia (× 1250).

Pneumonia is inflammation of the lung caused by infection. There are three quite different and easily recognizable types. In lobar pneumonia a whole lobe of lung tissue (or at least, a large part of a lobe) is affected at the same time. In bronchopneumonia, on the other hand, the disease is usually less extensive and starts in the bronchi and bronchioles before spreading to affect patches of lung tissue in one or both lungs. The third type of pneumonia is quite unlike lobar pneumonia or bronchopneumonia in both symptoms and course. For this reason it is called atypical pneumonia.

Although there are important differences between the types of pneumonia, the symptoms in all three varieties are due to inflammation of the lings' air sacs, the alveoli. All three varieties are associated with a high temperature and a cough. Furthermore, since inflamed alveoli are unable to play their proper part in respiration, there is difficulty in breathing. Sometimes, particularly in lobar pneumonia, there is severe pain in the chest as the inflammation spreads to the lining of the lungs.

Lobar pneumonia was known to the physicians of ancient Greece and an excellent account of this illness was written as early as the 2nd century AD by the Alexandrian physician Aretaeus of Cappadocia. It is an infectious disease which is easily transmitted from person to person. In the days when lobar pneumonia was a common illness it frequently occurred in small epidemics – a whole household, or school, or prison community would be affected at the same time.

The cause of lobar pneumonia was discovered by the German physician Fraenkel, which found the microbe now known as Streptococcus pneumoniae (see streptococcus) in the mouths and throats of many of his pneumonia patients. Later it was discovered that there are many different strains of the microbe, but that only a few of them are important causes of lobar pneumonia. Streptococcus pneumoniae may occasionally invade the lungs without causing any illness. People affected in this way are called carriers, for although they are well themselves, they can transmit the germ to other people in whom it causes a typical pneumonia attack.

Before the invention of the sulfonamide group of drugs and the discovery of antibiotics an attack of lobar pneumonia ran a characteristic course which has been described in great detail by many medical writers. It is fortunate that we have these records, because the drugs now available are so effective in the treatment of lobar pneumonia that the natural course of the disease is seldom seen today. Treatment with antibiotics in the early stages of the illness prevents the growth of the microbes, and the disease is arrested.

The cause of bronchopneumonia is seldom the virulent microbe Streptococcus pneumoniae, but usually one or other of several different microbes which are commonly found in the respiratory passages of healthy people. Under normal circumstances these microbes are held in check by the body's natural defenses – the immune system – but when these defenses are weakened the microbes multiply rapidly and may then cause disease.

Weakening of the body's defenses occurs in many illnesses, particularly in the very young and very old. It is for this reason that bronchopneumonia is a frequent complication of childhood diseases such as measles and whooping cough. In adults it is often a complication of influenza, and it is likely to attack old people who are confined to bed with any illness or injury which prevents them from moving about properly. Bronchopneumonia may follow an attack of bronchitis at any age.

Unfortunately, antibiotics are, for a variety of reasons, less effective in this illness than in lobar pneumonia.

Atypical pneumonia, also called walking pneumonia, is a far less serious illness than either lobar or bronchopneumonia. Even without treatment patients almost always recover quite quickly. Its cause only became known in the middle of the 20th century.

During the World War II it was discovered that some cases of atypical pneumonia are caused by an organism called Rockettsia burneti. Then, a few years later, it was found that many others are the result of infection of the lungs with viruses. This viral pneumonia proved to be infectious, and it was common among soldiers.