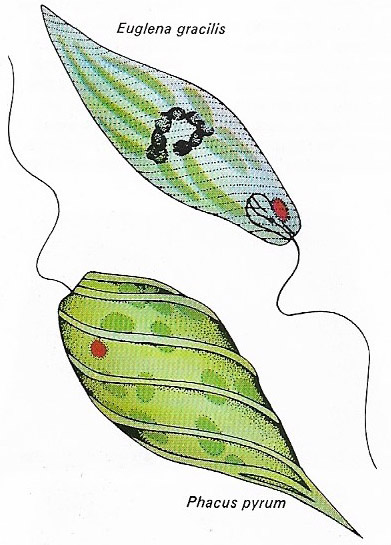 Eugelenoids are microscopic, single-celled organisms which live in water and are members of the kingdom Protista. Although neither plants nor animals, they have some features in common with each. Like plants, most euglenoids are capable of photosynthesis; like animals they can move, using a pair of whip-like flagella, and can change shape.

There are 54 genera of euglenoids including Trypanosoma, Euglena, and Eutreptia, and approximately 900 species. They are most commonly found in freshwater that is rich in organic materials, but can also inhabit stagnant water and marine water. Representative genara are Euglena and Phacus (Fig 1). Euglenoids are unicellular except the colonial genus Colacium. Many are spindle-shaped and many also have chloroplasts and are photosynthetic. Others feed by phagocytosis or by diffusion.

Euglena possess two flagella, one of which is long and used in locomotion, whike the other is short and does not protrude. Euglenoids lack a cell wall but have a protein-rich cell covering called a pellicle, which provides them with flexibility. Euglenoids also have a red, light-sensitive eyespot and a contractile vacuole to help pump out excess water. Euglenoids typically reproduce by binary fission although they are capable of producing resting spores which are useful under unfavorable environmental conditions.