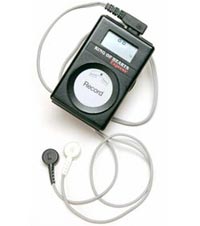 Like a Holter monitor, an event monitor may show what's causing symptoms of an arrhythmia (a problem with the speed or rhythm of the heartbeat). It also can show whether a heart rhythm problem is harmless or needs treatment. Serious symptoms may include dizziness, chest pain, and fainting. Complications may include heart failure, stroke, or sudden cardiac arrest.

Event and Holter monitors also are used to detect silent myocardial ischemia. In this condition, not enough oxygen-rich blood reaches the heart muscle. "Silent" means that no symptoms occur.

An event monitor is a pocket-sized device (smaller even than a Holter monitor because it doesn't have to store as much data) that is connected by wires to sensors attached at various points on the patient's chest by sticky pads. Different types of event monitors work in slightly different ways.

Postevent recorders are among the smallest event monitors. They can be worn like a wristwatch or carried in a pocket. The pocket version is about the size of a thick credit card. These recorders don't have wires that connect the device to chest sensors.

When the patient feels a symptom, he or she starts the recorder. A postevent recorder only records what happens after it is started. It may miss a heart rhythm problem that occurs before and during the onset of symptoms. Also, it may be hard to start the monitor when a symptom is in progress. (In some cases, this missing data might have helped in the diagnosis of a heart rhythm problem.)

Presymptom memory loop recorders are the size of a small cell phone. They're also called continuous loop event recorders. This type of monitor can be clipped to a belt or carried in a pocket. Wires connect the device to sensors on the patient's chest.

These recorders are always recording and erasing data. When the patient feels a symptom, he or she pushes a button on the device. The normal erase process stops. The recording will show a few minutes of the data from before, during, and after the symptom. In some cases, this makes it possible for a doctor to see very brief changes in the heart's rhythm.

Autodetect recorders are roughly palm-sized. Wires connect the device to sensors on the chest.

Autodetect recorders start by themselves. They detect abnormal heart rhythms and automatically record and send the data to the doctor's office.

The device records either when it is activated or automatically when symptoms occur. It depends on how the doctor programs it. Devices may differ, so the patient will be advised on how to use it. In some cases, a special card is held close to the recorder to start it.


Comparison of event and Holter monitors

An event monitor has two major advantage over the Holter monitor. First, the a patient can keep the event monitor for an extended period of time (usually 30 days and renewable), maximizing the chance of recording an infrequent or intermittent arrhythmia. Second, in the case of postevent and postsymptom memory loop recorders, the recording occurs only when triggered by the patient, so that the physician can determine whether the patient's symptoms are actually caused by an arrhythmia. In other words, if a patient feels severe palpitation while concurrent monitor recording showed only normal regular heartbeats, it can safely be concluded that the symptoms are not due to arrhythmias.

One disadvantage of a "traditional" event monitor compared to a Holter is that, too frequently, a patient may "forget" to have the monitor close by during an episode, or that a patient may be in a social situation in which making such a recording (the unit may make loud beeping sounds) may be socially unacceptable. Yet for other patients, making a recording and downloading the information over the phone may be more than the manual dexterities of the patients can handle. This is when an implantable loop recording can be helpful.