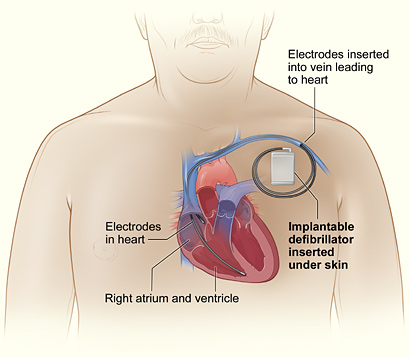 Fig 1. The location of an implantable cardioverter defibrillator in the upper chest. The electrodes are inserted into the heart through a vein.

Sudden cardiac arrest (SCA), also known as sudden cardiac death, is when the heart suddenly and unexpectedly stops beating. When this occurs, blood stops flowing to the brain and other vital organs. SCA usually causes death if not treated in minutes.

People with heart disease have a higher chance of having SCA. But most SCAs happen in people who appear healthy and have no known heart disease or other risk factors for SCA.

Ninety-five percent of people who have SCA die from it, most within minutes. Rapid treatment of SCA with a device that sends an electrical shock to the heart (called a defibrillator) can be lifesaving. Automated external defibrillators (AEDs), which are often found in public places like airports and office buildings, can be used to save the lives of people having SCAs.

Most cases of sudden cardiac arrest (SCA) are due to an arrhythmia called ventricular fibrillation (v-fib). In v-fib, the ventricles (the large pumping chambers of the heart) quiver very rapidly and irregularly instead of beating normally. When this happens, the heart pumps little or no blood to the body. Death results if the arrhythmia is not treated within a few minutes.

Several factors can cause the electrical problems that lead to SCA. These factors include:


structural changes in the heart

Several research studies are under way to try to understand these possible causes of SCA and to find other causes.

Each year, between 250,000 and 450,000 Americans have sudden cardiac arrest (SCA). Ninety-five percent of these people die within minutes.

SCA occurs most often in adults in their mid-thirties to mid-forties. It affects men twice as often as women. SCA rarely occurs in children unless they have inherited problems that make them likely to have SCA. Only 1 to 2 out of every 100,000 children experiences SCA each year.

The major risk factor for SCA is having coronary artery disease (CAD). Most people who have SCA have some degree of CAD. But most of these people don't know they have CAD until SCA occurs. Their CAD is "silent" (that is, it has no symptoms), and doctors and nurses have not previously found it. Because of this, most cases of SCA happen in people with silent CAD who have no known heart disease at the time of the event.

Many people with SCA had a silent heart attack before the SCA happened. These people have no obvious signs of having a heart attack, and they don't even realize that they've had one. The chances for having SCA are higher during the first 6 mo after a heart attack.

The risk factors for developing CAD include:

Other risk factors for SCA include:

Usually, the first sign of sudden cardiac arrest is loss of consciousness, which is similar to fainting. At the same time, breathing often stops and no heartbeat (or pulse) can be felt. Some people may first notice that they have a racing heartbeat or feel dizzy or lightheaded just before they faint.

Sudden cardiac arrest (SCA) happens without warning and requires immediate treatment. Rarely is there a chance to diagnose it with medical tests as it is happening. Instead, SCA is often diagnosed after it happens, by ruling out other causes of the patient's sudden collapse.

People who may be at high risk for SCA can see a cardiologist (heart specialist) who can decide whether they need preventive treatments. Some cardiologists specialize in recognizing and treating problems with the electrical system of the heart. These specialists are called electrophysiologists.

Doctors use several tests to help detect the factors that put people at risk for SCA. These tests include:

Sudden cardiac arrest (SCA) requires immediate treatment with a defibrillator, a device that sends an electrical shock to the heart. Defibrillation can restore a normal rhythm to a heart that is beating irregularly. To be effective, defibrillation must be provided within minutes of cardiac arrest. With every minute of delay in providing defibrillation, the chances of surviving SCA drop rapidly.

Police, emergency medical technicians, and other first responders are usually trained and equipped to use a defibrillator. The sooner 911 is called after a person experiences SCA, the sooner potentially lifesaving defibrillation can be provided.

Special defibrillators that untrained bystanders can use in an emergency are becoming more available in some public places, like airports, office buildings, and shopping centers. These devices are called automated external defibrillators (AEDs). To prevent delivering a shock to someone who may have fainted but is not having a SCA, AEDs are programmed to deliver a shock only if the computer detects a dangerously abnormal heart rhythm, such as ventricular fibrillation.

Cardiopulmonary resuscitation (CPR) should be given to a person having SCA until defibrillation can be provided.

A person who survives SCA is usually admitted to the hospital for observation and treatment. In the hospital, the heart is monitored closely, medicines may be given to try to reduce the chance of another SCA, and tests are performed to identify the cause of the SCA. If coronary artery disease is detected, the person may undergo a procedure called angioplasty to restore blood flow through blocked coronary arteries.

Often, a device called an implantable cardioverter defibrillator (ICD) will be surgically placed under the skin. An ICD continuously monitors the heart for dangerous rhythms. If SCA or another dangerous rhythm is detected, the ICD immediately delivers an electric shock to restore a normal rhythm.

Ways to prevent death due to sudden cardiac arrest (SCA) differ depending on whether a person has already had SCA; has never had SCA but is at high risk; or has never had SCA and has no known risk factors for it.


for people who have survived sudden cardiac arrest

People who have already had SCA are at high risk of having it again. For these people, research shows that an implantable cardioverter defibrillator (ICD) reduces the chances of dying from a second SCA. An ICD is surgically implanted under the skin (see Figure 1). It continually monitors the heartbeat and delivers a shock to the heart when it detects a dangerous rhythm. The shocks can be painful, like a kick in the chest. Medicines can be given to try to reduce how often the person experiences the irregular heartbeats that trigger the device to deliver a shock.

An ICD is not the same as a pacemaker. Doctors mainly use pacemakers to treat hearts that beat too slowly. However, some ICDs also can function as pacemakers.


for people at increased risk of a first sudden cardiac arrest

People with severe coronary artery disease (CAD) are at increased risk for SCA. This is especially true if they have recently had a heart attack. For these people, a type of medicine called a beta blocker can help reduce the chances of dying from SCA.


for people with no known risk factors for sudden cardiac arrest