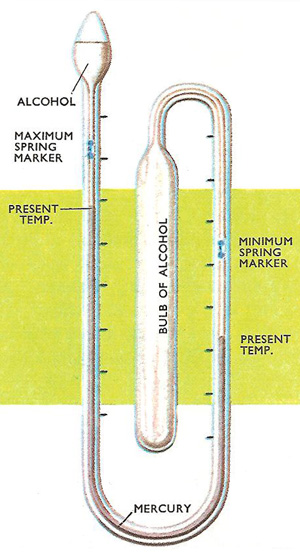 Fig 1. A maximum and minimum thermometer, used to record the highest and lowest temperatures occurring over a period of time. In the center is a reservoir of alcohol. Between this and the alcohol at the other end is a thread of mercury, which seesaws as the alcohol expands and contracts with the temperature changes. The mercury pushes markers which stay at the positions corresponding to the highest and lowest temperatures. 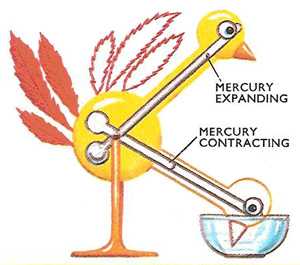 Fig 2. The dipping bird tiy is little more than a tube of mercury, fastened on a pivot as shown. Normally the weight of mercury tilts the bird's head down. This puts its head into a bowl of water, wetting it. The evaporation of the water causes the head to cool, lowering the temperature of the mercury, which contracts. This alters the balance of the bird so that it tilts upward. When the temperature rises the mercury expands, causing the bird to dip down once again.

When any substance is heated its bulk almost always increases. In other words, whether it is a solid, a liquid, or a gas, it expands on heating.

We make use of the expansion of a liquid in the most common type of thermometer. Mercury or alcohol is sealed into a narrow glass tube with a small bulb at the bottom. When the temperature is low the mercury does not take up much room and the level in the tube is low. As the temperature rises the mercury expands, and some is pushed out from the bulb into the tube. Since the tube is narrow, even a slight expansion of the mercury results in an appreciable rise in level. The expansion (increase in bulk) is proportional to the increase in temperature, and so the level of mercury in the tube can be used to indicate how warm or cold (i.e. at what temperature) the thermometer and its surroundings are. A scale is marked off along the tube dividing it into evenly spaced 'degrees' of temperature.

If equal volumes of a liquid, a solid, and a gas are heated through the same rise in temperature, it is generally found that the liquid expands more than the solid but less than the gas. Measuring exactly how much a liquid expands with a given rise in temperature is not a completely straight forward operation. The trouble is that a liquid must have a container and the container expands when the liquid is heated. The increase in capacity of the container masks the true expansion of the liquid. For example, imagine a bottle completely full of some ideal liquid that does not expand at all. As the bottle and its contents are heated the bottle expands so that the original quantity of liquid is no longer sufficient to fill it completely. In this example the liquid would appear to have contracted. In practice the true expansion of a liquid is calculated by adding the increase in volume of the container to the apparent (or measured) expansion of the liquid.

Not all liquids, by any means, expand regularly. Water, for example, is one that behaves in a very unusual way. From 4°C down to 0°C it expands as it is cooled.


How a pond freezes over

When most liquids are cooled they contract and become steadily more and more dense (i.e. any given volume of liquid becomes heavier). Water, however, is an exception. It behaves normally while it is cooled down to 4°C, but as it is cooled from 4°C down to 0°C it becomes less dense. The water in a pond gives up heat to the cold air in contact with its surface. The surface water cools down to 4°C and, because it is more dense than the rest of the water, sinks to the bottom. Eventually the whole of the pond is at 4°C. Further cooling lowers the temperature of the surface water down to 0°C. This makes it less dense than the water at 4°C, so the coldest water stays at the top of the pond where it is gradually turned into ice. If water behaved like other liquids, the warmest water would always be at the surface and would quickly lose its heat to the air. The whole pond would soon cool down to 0°C and would turn into a solid block of ice.