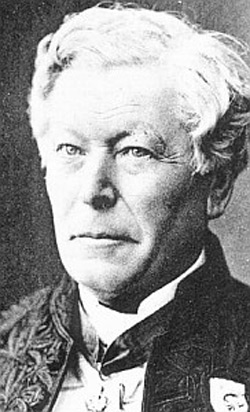 Herve Fayé was a leading French astronomer and professor at the &#201cole Polytechnique who, at a time when pluralism was popular among the intelligentsia in France, argued that extraterrestrial life might be quite uncommon. Habitable planets would be unlikely, he thought, around stars that were small, variable, or tightly packed in clusters. Within the solar system, he suggested that the requisite climatic, atmospheric, chemical, and geological conditions necessary for life occurred only on Earth and possibly on Mars and Venus. Furthermore, adopting a modified version of the nebular hypothesis, Fayé considered the formation of planetary systems like our own to be a rare event.

Faye's Comet was originally a long-period comet that was deflected by a close passage of Jupiter into a much smaller orbit with a period of 7.34 yr, just before its discovery by Faye at the Royal Observatory in Paris in Nov 1843. The solar heating of Faye's nucleus is such that gas and dust are not emitted from the subsolar point, that is, where it is noon on the comet, but from a spot on the afternoon section. The jet effect that results gradually changes the comet's orbit. Moreover, the jet itself seems to be shifting position, because of precession of the comet's spin axis, which modifies the orbit still further.