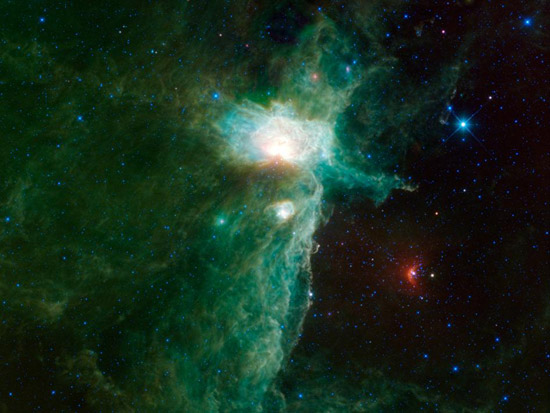 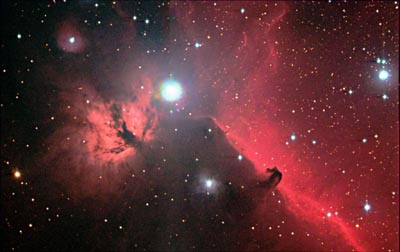 The Flame Nebula (NGC 2024) is a beautiful emission nebula in the constellation Orion that is ionized and caused to luminesce at visible wavelengths by the easternmost star in Orion's Belt, Alnitak (Zeta Orionis). It is part of the Orion Complex, a vast, dusty region that is the scene of vigorous new star birth. Seen in ordinary light, the Flame Nebula glows in a variety of colors, from yellow to orange, though the predominant hue is shell-pink.

In the image of the Flame Nebula captured by NASA's WISE infrared space telescope, shown here above and to the right, different colors have been assigned to different wavelengths of infrared light. The wispy tendrils in the image are part of the larger Orion Complex. In the Flame Nebula itself, a number of massive stars are hollowing out a cavity in the dust with their intense radiation. Bright ultraviolet light from a central massive star, about 20 times heavier than the Sun, which is deeply embedded in the dust and largely hidden from view, is causing the cloud to glow in infrared light. This star would be almost as bright to our eyes as the three stars in Orion's Belt, but the dust makes the star appear 4 billion times fainter than it really is.

Also visible in the image above is the reflection nebula NGC 2023, seen as a bright circle in the lower half of the image, and the famous Horsehead Nebula, which is hard to see but located to the right of one of the lower, vertical ridges. The bright red arc at lower right is a bow shock, where material in front of the speeding multiple-star system Sigma Orionis is piling up (see Sigma Orionis star cluster).