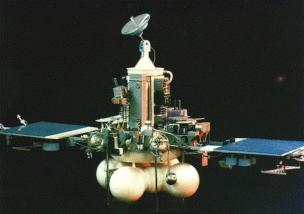 Fobos was the name of two, nearly identical Soviet spacecraft intended to explore Mars from orbit and land probes on Phobos, the larger (but still very small) martian moon. One failed completely, the other partially. The mission involved cooperation with 14 other nations including Sweden, Switzerland, Austria, France, West Germany, and the United States (which contributed the use of its Deep Space Network for tracking).

As well as onboard instruments, each vehicle carried a lander designed to carry our various measurements on Phobos' surface. Fobos 2 also carried a second, smaller "hopper" lander designed to move about using spring-loaded legs and make chemical, magnetic, and gravity observations at different locations.

Fobos 2 operated according to plan throughout its cruise and Mars orbital-insertion phases, gathering data on the Sun, interplanetary medium, Mars, and Phobos. However, contact with the probe was lost on March 27, 1989, two months after it had entered martian orbit and shortly before the final phase of the mission during which the spacecraft was to approach within 50 m of Phobos' surface and release its landers. The cause of the failure was found to be a malfunction of the onboard computer. Contact with Fobos 1 had been lost much earlier, while the spacecraft was en route to Mars. This failure was traced to an error in the software uploaded to the probe which had deactivated its attitude thrusters. This caused a loss of lock on the Sun, resulting in the spacecraft orienting its solar arrays away from the Sun, thus depleting the batteries. It remains in solar orbit.