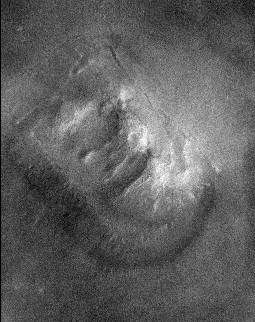 The dream of finding traces of an advanced civilization on Mars has been a long time a-dying and is far from dead, in the minds of some romantics, even today. Among the many photographs taken in 1976 by the Viking orbiters are two of a region known as Cydonia, at latitude 40° north, which include a feature reminiscent of a human face, roughly 2.5 km (1.6 miles) long, 2 km (1.2 miles) wide and up to 940 m (2,600 ft high). Science fiction writers have long employed the theme of artifacts being placed at strategic sites in the solar system by an alien race in order that someday, when our species had the technological know-how, it would uncover these relics and perhaps go on to make contact with their creators (see sentinel hypothesis). The film and novel 2001: A Space Odyssey, with its enigmatic black monoliths, put this idea firmly on the map of possible future scenarios. And, for some believers, it seemed, with the discovery of the "face" on Mars, that speculation had become fact – a quarter of a century ahead of schedule.

The "face" was first noticed in July 1976 by NASA personnel and promptly dismissed as a "trick of light and shadow" when shown to journalists at a press conference at the Jet Propulsion Laboratory in Pasadena, California. Three years later, computer engineers Vincent DiPietro and Gregory Molenaar, under contract at NASA's Goddard Space Flight Center, took a fresh interest in Viking frame 35A72, which had been filed away under the label "Head," and a second frame, 70A13, on which DiPietro found another image of the Face, under different lighting conditions, taken 35 days after the first. Also on frame 70A13, the attention of the two researchers was drawn to what appeared to be a five-sided pyramid, about 800 m high and 3 km long, located 16 km from the Face. The images on both frames were processed by DiPietro and Molenaar using a new software technique they had devised. Their conclusion: the Face and the Pyramid were hard to reconcile with any naturally-formed objects.

In mainstream scientific circles, DiPietro and Molenaar's published findings were largely ignored. However, former NASA consultant Richard Hoagland, whose unorthodox views had increasingly distanced him from most planetary scientists, was intrigued. To the southwest of the Face he pointed out "a remarkably rectilinear arrangement of massive structures interspersed with several smaller pyramids" which, provocatively, he named the City. In his book, The Monuments of Mars, he builds a thesis as imaginative, as ingenious, and ultimately as insubstantial as that of Percival Lowell a century earlier.

In 1988, Mark Carlotto, another computer specialist, processed the Viking images using a method called "shape-from-shadowing." From an analysis of the shadows cast by the Face in the two Viking pictures he came up with a three-dimensional reconstruction of its profile. He then processed this to find out how the Face would appear from different directions and with the sunlight falling on it from various angles. There are many examples of rock formations on Earth that look like human heads, but only from certain directions. In the case of the martian Face, Carlotto concluded that it continues to look like a face from whichever direction it is viewed. Moreover, he claimed: "[the image enhancement] indicates that a second eye socket may be present on the right, shadowed side of the Face; fine structure in the mouth suggests that teeth are apparent."1

A number of best-selling, pseudoscientific books, and many articles, have been written which make much of the significance of the "face." Even the loss of the Mars Observer spacecraft in August 1993 was attributed by some believers to a cover-up to hide the discovery of martian life! Unfortunately, the arrival of the Mars Global Surveyor (MGS) probe brought unwelcome news for those seeking confirmation of an alien edifice. Commenting on a high-resolution picture of the "face" taken by MGS in April 1998, Ron Baalke of JPL, said: "It's just an ordinary looking hill. With no shadows there are no facial features at all." Not surprisingly, fans of the "face" have repudiated the findings and published their own processed versions of the MGS images. In doing so, they have continued a tradition – a quest for a mythical Mars. It took a single-minded researcher and articulate communicator, Percival Lowell, to give credibility in the public mind to the theory of canals. His nearest equivalent today is that small band of amateur investigators who still hope to discern, at the limits of resolution and beyond, hints of intelligent design.

This having been said, those interested in a thoughtful discussion of the remote possibility that the "face" may be anything other than an unusual geological formation (which is the author's opinion) may wish to read several reports, including two by Mark Carlotto, at New Frontiers in Science.