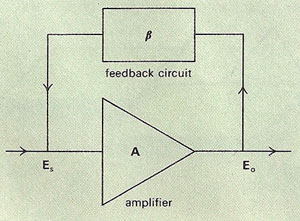 Block diagram of a feedback circuit. The output potential Eo is related to Es by the formula

where A is the amplifier gain and β the fraction of the output signal returned to the input. Thus with an amplifier with gain ×5, and a negative feedback of ×0.1, the output potential is 3.3 times the input signal.

Feedback is the mutually reciprocal effect of one system or subsystem on another; put another way, the coupling of the output of a process to the input of that process or another.

Negative feedback is when two subsystems act to dampen the output of the other. For example, the relation of predators and prey can be described by a negative feedback loop since the more predators there are the greater the decline in the population of prey, but when prey decrease too much so does the population of predators since they don't have enough food. Positive feedback means that two subsystems are amplifying each other's outputs, e.g., the screech heard in a public address system when the mike is too close to the speaker. The microphone amplifies the sound from the speaker which in turn amplifies the signal from the microphone, and so on. Feedback is a way of talking about the nonlinear interaction (see nonlinear system) among the elements or components in a system and can be modeled by nonlinear differential or difference equations as well as by the activity of cells in a cellular automata array.

In the design of machines, servomechanisms and governors exemplify feedback systems. The most important application of the feedback concept in modern technology comes in electronics where it is common practice to feed some of the output of an amplifier back to the input to help reduce noise, distortion, or instability. Most often used is negative feedback in which the effect of the feedback is to reduce the amplifier's output while stabilizing its performance.

Feedback mechanisms are also important in regulating many physiological processes; for example, the production of hormones and neurotransmitters.