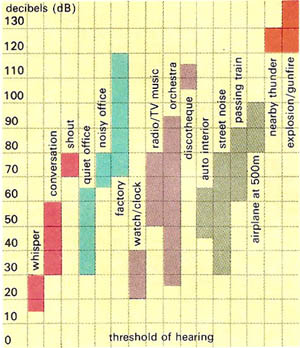 In the science of acoustics, noise is unwanted sound. As far as humans are concerned this is a subjective definition: people vary in their sensitivity to noise; many sounds are agreeable to some and noisy to others. Blasts or explosions can cause sudden damage to the ear and prolonged exposure to impulsive sounds such as those of a pneumatics drill can cause gradual hearing impairment. In general, any sound that is annoying, interferes with speech, or reduces concentration or work efficiency may be considered as noise.

From a physical viewpoint, sound waves (either in air or vibrations in solid bodies) that mask required signals or cause fatigue or breakdown of equipment or structures are noise and should be minimized. In air, sound is radiated spherically from its source as a compressional wave, being partly reflected, absorbed, or transmitted on hitting an obstacle. Noise is usually a non-periodic sound wave, as opposed to a periodic pure musical tone or sine-wave combination. It is characterized by its intensity (measured in decibels), frequency, and spatial variation; a sound level meter and frequency analyzer measure these properties.


In electronics, noise is an unwanted or interfering current or voltage in an electrical device or system. Its presence in the amplifying circuits of radios, television receivers, etc., may mask or distort signals. Unpredictable random noise exists exists in any component with resistance because of the thermal motion of the current-carrying electrons, and in electron tubes due to random cathode emission. Thermal radiations and vibrations in the atmosphere also cause random noise. Nonrandom noise arises from spurious oscillations and unintended couplings between components.


In general science, noise is the random fluctuations that are always associated with a measurement that is repeated many times over. Noise appears in astronomical images as fluctuations in the image background. These fluctuations do not represent any real sources of light in the sky, but rather are caused by the imperfections of the telescope. If the noise is too high, it may obscure the dimmest objects within the field of view.