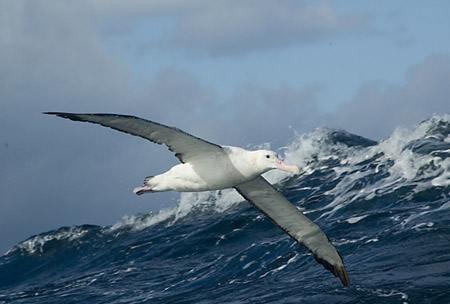 A wandering albatross in flight.

Flight the ability to travel through the air for extended periods. The only animals that are capable of sustained flight are the extinct pterodactyls, some insects, a few fish and mammals, and most birds. Very few insects are completely wingless, and most have two pairs of wings that flap together. In flies and beetles one pair is modified. Usually muscles distort the thorax, forcing the wings up and down at rates of up to 1,000 beats per second in midges.

The only true flying fish are certain freshwater hatchetfish and butterfly fish. The tropical flying fish in fact glides. In birds, power for flying comes from the breast muscles, which control both the up and down strokes of the wing. Wing shape depends on the kind of flight; narrow for gliding and broad for soaring.

The only flying mammals are the bats, whose wings are composed of skin stretched between the finger and back legs.