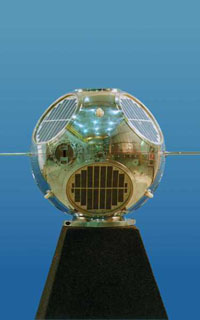 GRAB was the first series of American ELINT (electronic intelligence) satellites, operated by the United States Navy between July 1960 and August 1962. Documents, declassified only in 1998, reveal that the project was originally called "Tattletale," then renamed GRAB (an acronym of the spurious name "Galactic Radiation and Background"), and later revised to GREB (Galactic Radiation Experimental Background). Each GRAB carried two payloads – the classified ELINT satellite itself and an unclassified satellite designed to measure solar radiation. The latter, known as Solrad, was publicly disclosed by the Department of Defense at the time and used as a cover for the intelligence mission. However, the Solrad experiments were not merely for show: by revealing the effect of solar radiation on the ionosphere and, hence, on high-frequency radio communications, they supplied data of military value.

Work on GRAB began in 1958, around the time of the first successful Vanguard launch. Reid Meyo of the Naval Research Laboratory (NRL) Countermeasures Branch had developed an electronic intelligence antenna for submarine periscopes. NRL was seeking quick military exploitation of the Vanguard satellite it had developed and it occurred to Reid that the NRL could simply put his periscope antenna into orbit aboard a Vanguard. The original calculations behind this idea were done, in the best tradition of aerospace engineering, on a restaurant placemat.

From 800 kilometers above the Earth, a GRAB satellite's circular orbit passed it through the beams from Soviet radar whose pulses traveled beyond the horizon into space. GRAB's task was to receive each radar pulse in a certain bandwidth and transpond a corresponding signal to collection huts at ground sites within GRAB's field of view. Operators in the huts recorded the transponded data and couriered it to NRL for evaluation.