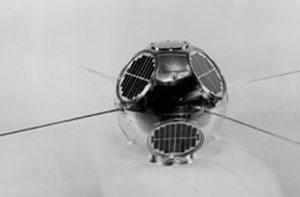 Solrad was a series of missions, conceived by the United States Naval Research Laboratory in the late 1950s, to study the effects of solar emissions on the ionosphere and also to conceal the existence of classified intelligence satellites, known as GRAB, that were launched at the same time. The Solrad series was designed to provide continuous coverage of wavelength and intensity changes of solar radiation in the ultraviolet, soft (longer wavelength) X-ray, and hard (shorter wavelength) X-ray ranges. All missions up to Solrad 7B were GRAB copassengers. Solrad 8, 9, and 10 were also known as Explorer 30, 37 (or Solar Explorer B), and 44, respectively.

Solrad 1 was unique in that it: determined that radio fade-outs were caused by solar X-ray emissions; was one of the two satellites launched during the world's first multiple satellite launching; was the world's first orbiting astronomical observatory; and was the first satellite to be successfully commanded to shut off.