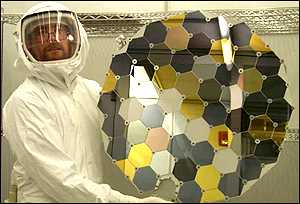 One of the Genesis collecting arrays.

Genesis was a NASA spacecraft whose mission was collect 10 to 20 micrograms of particles from the solar wind using wafers of aerogel set in wing-like arrays. Scientists know that the solar system evolved a little under five billion years ago from an interstellar cloud of gas, dust, and ice, but the exact composition of this cloud remains unknown. As its name suggests, Genesis was designed to help unravel this mystery by recovering material that has been shot out of the upper layers of the Sun – material that has not been modified by nuclear reactions in the Sun's core and is thus representative of the composition of the original solar nebula.

For two years, Genesis orbited the first Lagrangian point (L1) of the Earth-Sun system. In this remote, stable trajectory, Genesis was well outside Earth's magnetosphere, which deflects the solar wind away from the terrestrial environment. Genesis then returned to enable the recovery of its 210-kg sample capsule in Sep 2004. The capsule was supposed to descend by parachute and then be caught by a helicopter over the Utah desert. However, a construction fault in the spacecraft led to the failure of its parachute to deploy and the capsule plummeted to Earth at high speed. Efforts are now underway to recover solar wind material from the damaged and partly contaminated collection wafers.