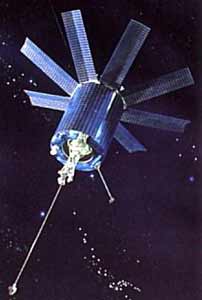 Geo-IK was a Soviet geodetic satellite system, also known as Musson ("monsoon"). The first Geo-IK was launched in 1981, to be followed by roughly one more per year until the mid-1990s. Normally one or two satellites were operational at any given time. Each 1,500-kg Geo-IK was launched by a Tsyklon-3 from Plesetsk and placed into an almost circular low Earth orbit with a average altitude of 1,500 km and an inclination of 73.6 or 82.6°. In contrast, the Etalon geodetic satellites were placed in much higher orbits and were completely passive.