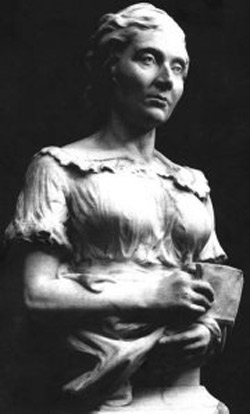 Sophie Germain was a French mathematician who made notable contributions to number theory and to mathematical physics despite a lack of formal training and the social prejudices of her day. She taught herself, against her parents' wishes, often at night, during the Reign of Terror following the French Revolution, with books from her father's library. When deprived of heat and light, she would wrap herself in quilts and use candles. Finally her parents acquiesced to her "incurable" passion for mathematics and let her study. Through Joseph Lagrange, to whom she had originally submitted work under a pseudonym, she gained access to a circle of distinguished mathematicians, including Carl Gauss.

Among her most important work was an analysis of Ernst Chladni's studies of vibrating surfaces, and her proof that if x, y, and z are integers and if x5 + y5 = z5 then at least one of x, y, or z must be divisible by 5 (a result now known as Germain's Theorem); this was an important early step towards proving Fermat's Last Theorem.