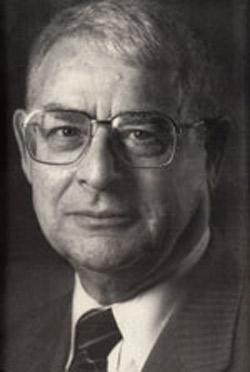 Riccardo Giacconi was an Italian-born astrophysicist and pioneer of X-ray astronomy. Giacconi earned a PhD in cosmic ray physics at the University of Milan before joining American Science and Engineering, a Massachusetts research firm, in 1959 to begin his X-ray work. His team developed grazing-incidence telescopes and launched them on rockets. In 1962 they discovered Scorpius X-1, the first known X-ray source outside the Solar System. They then built the Uhuru X-ray satellite and made the first surveys of the X-ray sky. Joining the Harvard-Smithsonian Center for Astrophysics in 1973, Giacconi led the construction and successful operation of the powerful X-ray observatory, HEAO-2, also known as Einstein, which made detailed images of X-ray sources. Giacconi was the first director of the Space Telescope Science Institute from 1981 to 1993, and he directed the European Southern Observatory for the next six years. In 1999 he became president of Associated Universities, the operator of the National Radio Astronomy Observatory.