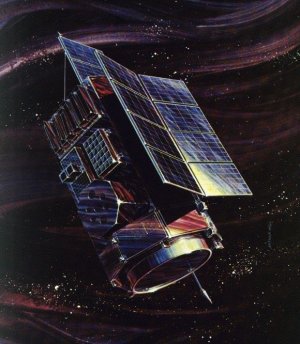 HEAO (High Energy Astrophysics Observatory) was a series of three very large scientific satellites launched by NASA, beginning in 1977, to carry out detailed observations of the sky at short wavelengths, from ultraviolet to gamma rays.

An X-ray astronomy satellite that surveyed the sky in the 0.2 keV–10 MeV energy band, providing nearly constant monitoring of X-ray sources near the ecliptic poles. More detailed studies of a number of objects were made through pointed observations lasting typically 3–6 hours. The spacecraft remained active until Jan 9, 1979.

The first fully imaging X-ray telescope to be placed in orbit; later renamed the Einstein Observatory to honor the centenary of the great physicist's birth. Its angular resolution of a few arcseconds, field-of-view of tens of arcminutes, and sensitivity several hundred times greater than any previous mission provided, for the first time, the capability to create images of extended objects and diffuse emission and to detect faint sources at such high energies (0.2–4.5 keV). It revolutionized astronomers' view of the X-ray sky. Observations ceased in April 1981.

Like its predecessor HEAO-1, a survey mission operating in the hard X-ray and gamma-ray (50 keV-10 MeV) band. Its High Resolution Gamma-Ray Spectrometer Experiment, built by JPL (Jet Propulsion Laboratory), was the largest germanium spectrometer placed in orbit at that time. The mission effectively ended when the cryogenic coolant for the germanium detectors ran out in May 1981.

All the HEAO's were launched by Atlas Centaur SLV-3D's from Cape Canaveral.