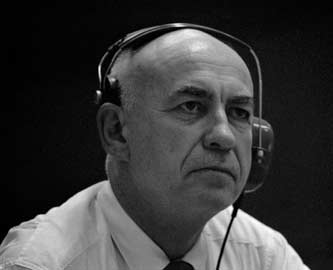 Robert Gilruth was an influential NACA (National Advisory Committee for Aeronautics) engineer who worked at the Langley Aeronautical Laboratory (1937–46), then as chief of the pilotless aircraft research division at Wallops Island (1946–52), and explored the possibility of human spaceflight before the creation of NASA. He served as assistant director at Langley from 1952–59 and as assistant director (manned satellites) and head of the Mercury Project from 1959–61, technically assigned to the Goddard Space Flight Center but physically located at Langley. In early 1961 Glennan established an independent Space Task Group (already the group's name as an independent subdivision of the Goddard center) under Gilruth at Langley to supervise the Mercury Project. This group moved to the Manned Spacecraft Center, Houston, Texas, in 1962, and Gilruth served as the first director of the Houston operation (1962–72). During his 10 years as head of the center, Gilruth directed 25 manned space flights, including the first Mercury flight in 1961 and the first Apollo moon landing in 1969. Gilruth was also in charge of the development and operation of the Gemini spacecraft, a two-man craft used to perfect techniques for the control, rendezvous and linking of spaceships in Earth orbit. Gilruth was born in Nashwauk, Minnesota, and received degrees from the University of Minnesota.