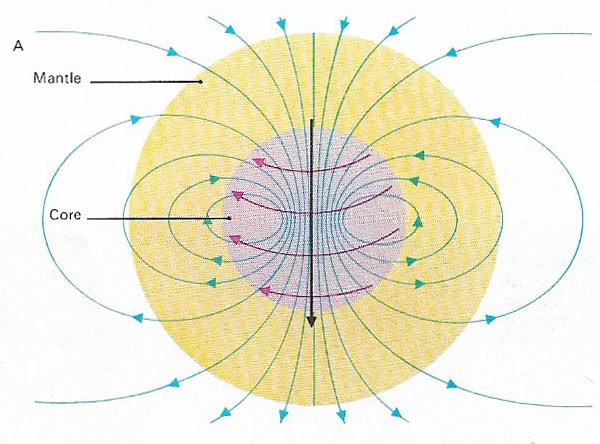 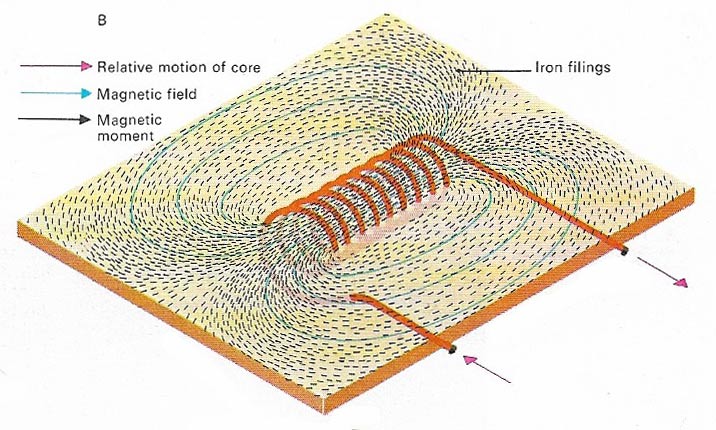 Fig 1. The magnetic field originating inside Earth makes up about 90 per cent of the field observed at ground level. The remainder is due to currents of charged particles coming from the Sun and to magnetism of rocks in the crust. The difference in rotation speed between the liquid outer core and the mantle creates a dynamo effect (A), which generates a field similar to that of a coil (B). In reality the situation is more complex for it involves interaction between two types of magnetic fields and small variations may change the polarity of Earth's field. Irregularities in the magnetic field at Earth's surface are caused by minor eddies of the core liquid. Their displacement in time results in long-term variations in the geomagnetic field, causing gradual changes in direction for magnetic north in given locations. 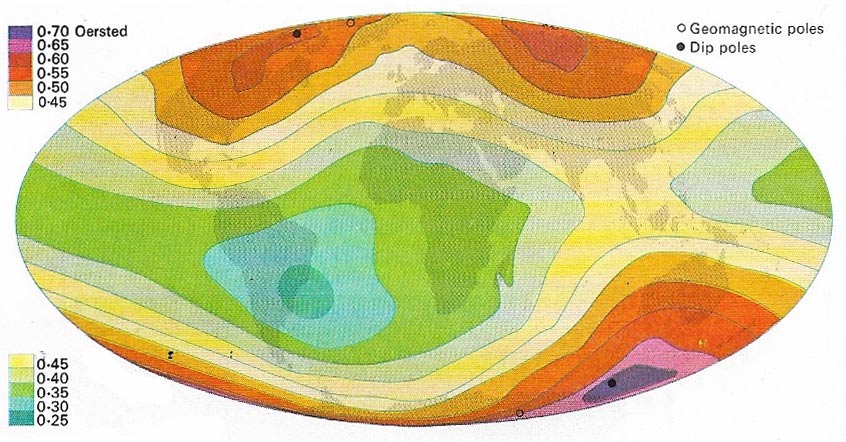 Fig 2. The intensity of Earth's magnetic field is strongest at the pole sand weakest in the equatorial regions. If the field were purely that of a bar magnet at Earth's center and parallel to the spin axis, the lines of equal intensity would follow the lines of latitude and the magnetic poles would coincide with the geographic poles. In reality the "bar magnet" field is inclined at about 11° to the spin axis and so are its geomagnetic poles. Also the real field is not purely that of a bar magnet. The "dip poles", where the field direction is vertical (downward at the north pole and upward at the south dip pole), are themselves offset with respect to the geomagnetic poles – each by a different amount so that the S dip pole is not exactly opposite the N dip pole. The poles and the configuration of the field change slowly with time. 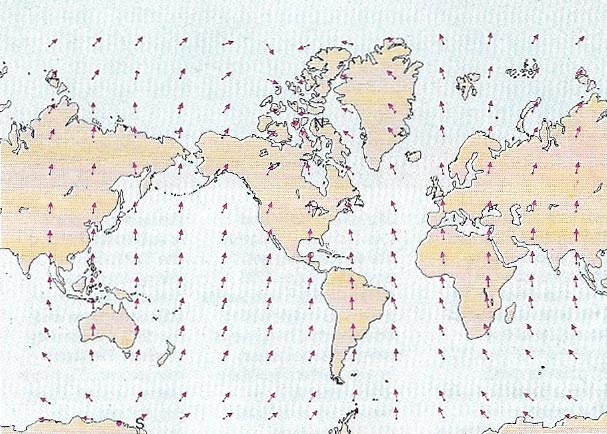 Fig 3. The declination is the angle between the direction of a magnetic compass and geographic north. The lines of force radiate from the southern dip pole (S) and converge toward the northern dip pole (N). The arrows symbolize the direction of the magnetic north in 1955. Declination exists because Earth's field is not exactly like that of a bar magnet lined up along Earth's axis. Account of this must be taken in navigation. 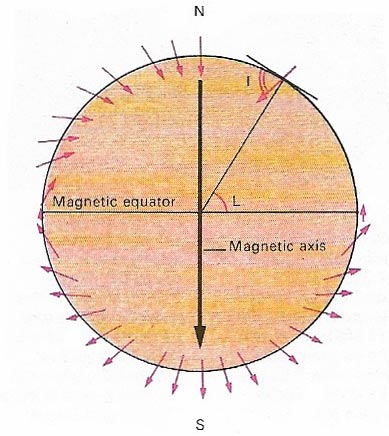 Fig 4. The dip or inclination (I) of the magnetic field at Earth's surface is related to the magnetic latitude (L) measured relative to the magnetic axis. Assuming that Earth's field averages out like a bar magnet aligned along the geographic axis, this allows the calculation of ancient latitudes of a land using paleomagnetic data. The inclination is measured with a special compass with a horizontal pivot but does not pose a navigation problem. 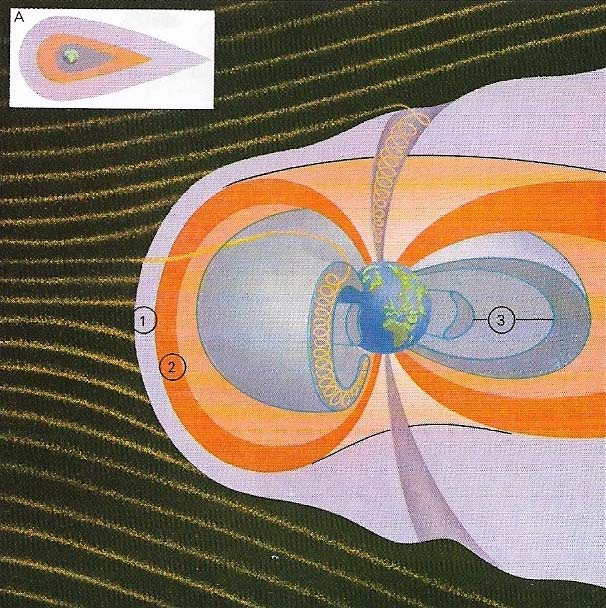 Fig 5. The magnetosphere is the region in which Earth's magnetic field can be detected. It would be symmetrical were it not for electrically charged particles streaming from the Sun (A), which distort it to a tear-drop shape. The particles meet Earth's magnetic field at the shock front (1). Behind this is a region of turbulence and inside the turbulent region is the magnetopause (2), the boundary of the magnetic field. The Van Allen belts (3) are two zones of high radiation in the magnetopause. The inner belt consists of high-energy particles produced by cosmic rays and the outer belt of solar electrons. 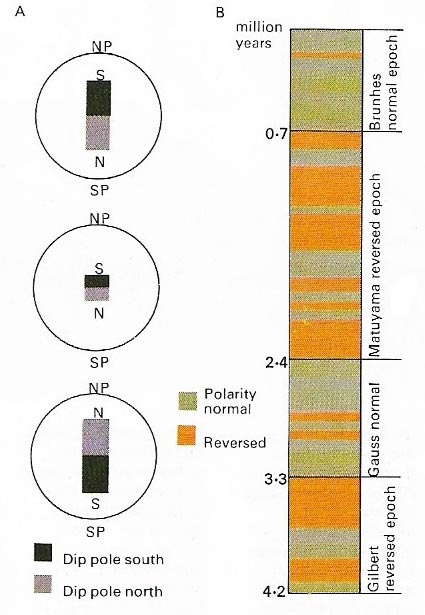 Fig 6. Field reversals are the changes of polarity (north becoming south and vice versa) which occurred many times during geological history. The polarity of Earth's magetic field does not flip over; its magnetic strength decreases to zero then slowly increases in the opposite direction (A). Rocks "fossilize" the magnetic field when they are formed. If a sufficient number of rocks of different ages are dated, and their polarity measured, a worldwide magnetic time scale is obtained. The magnetic time scale featured here (B) shows the significant changes in magnetic polarity over the last 4.2 million years. 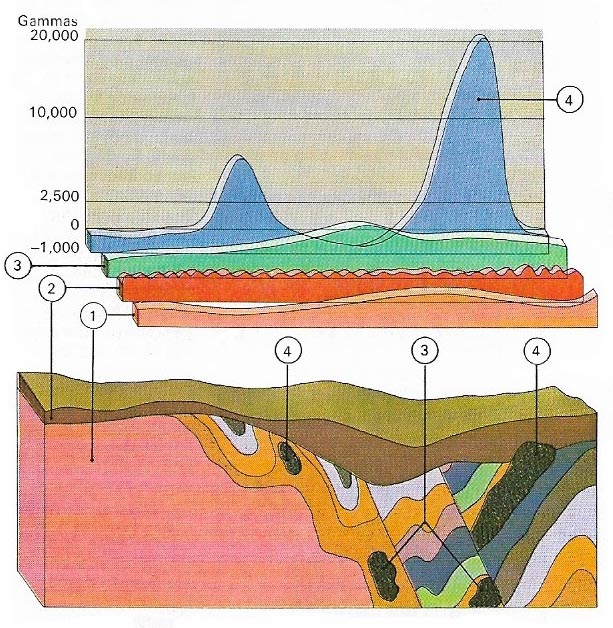 Fig 7. In mineral prospecting, magnetometers can be used to detect variations in Earth's magnetic field due to ores: (1) regional magnetism of the country rocks; (2) background magnetism due to topsoils; (3) effects of deep-seated ore bodies; (4) effects from near surface ores. 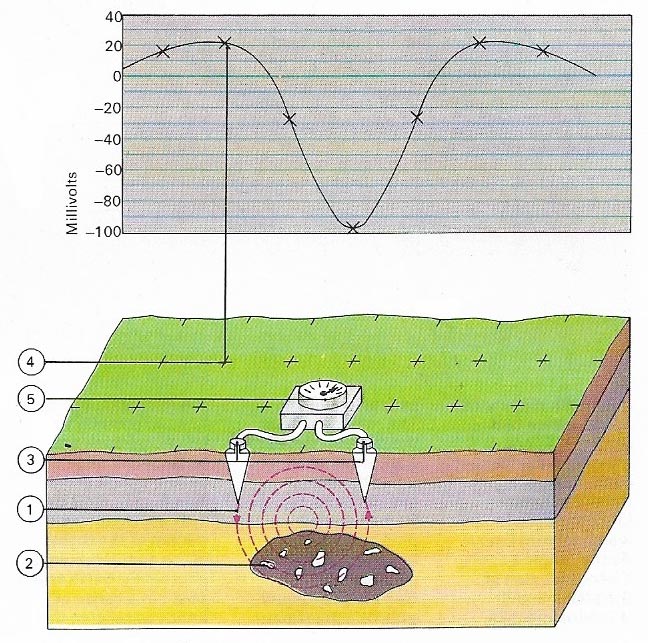 Fig 8. Electrical prospecting for minerals makes use of natural ground currents (1) related to the magnetic field and influenced by ore bodies (2). Two electrodes (3), placed in the ground at staked points (4), are connected to a millivoltmeter (5) and the voltages at the points are measured. Variations may indicate the presence of ores.

Earth has a strong magnetic field. The intensity of the geomagnetic field at Earth's surface is approximately 32 microteslas (0.32 gauss) at the equator and 62 microteslas (0.62 gauss) at the north pole. A bar magnet suspended by a thread eventually comes to rest with one end pointing towards Earth's north magetic pole, the other toward the south magnetic pole. It behaves similarly if another bar magnet, or large coil of wire with electricity flowing through it, is brought near.

As Earth spins on its axis the fluid layer of the outer core allows the mantle and solid crust to rotate relatively faster than the inner core (see Earth composition and internal structure). As a result, electrons in the core move relative to those in the mantle and crust. It is the electron movement that constitutes a natural dynamo and as a result produces a magnetic field, similar to that produced by an electric coil (Fig 1).

A compass needle points to a position some distance away from the geographical north and south poles. The difference, which is known as the declination (Fig 3), varies from one geographical location to another. Small-scale variations in Earth's magnetism are probably caused by minor eddies or swirls in the outer core at the junction between the core and the mantle. Large bodies of magnetized rock and ore in the crust can have a similar effect.

Earth's magnetic field is distorted by electrically charged particles from the Sun (Fig 5). These particles flow in the upper atmosphere and create small variations of the magnetic field at ground level. Some variations are regular – such as the diurnal (day and night) variation – and some, such as magnetic storms, are occasional.

The study of the magnetic field of the geological past is called paleomagnetism. It relies on the fact that rocks may pick up a permanent magnetization when they are formed, or when they remelt and cool at some later date. When rocks are heated they lose their magnetization, as an ordinary bar magnet does when heated. Rocks are remagnetized by Earth's field when they cool. This natural remanent magnetization, as it is called, lies parallel to the lines of the geomagetic field at the time of rock formation. Rock's magnetized in this way therefore carry a permanent record of the field, and can thus be used to study the geological history of Earth's magnetic field.

There are several ways in which magnetic clues to Earth's history can be deposited in the rocks. The technique of paleomagnetic investigation is to drill out a cylinder of rock and then measure its natural remanent magnetism. This gives the paleomagnetic coordinates of the specimen, which allows the original position to be plotted. Magnetic coordinates, expressed in magnetic latitudes (Fig 5), are similar to geographical latitudes (but the pole considered is the magnetic pole instead of the rotation pole). Paleomagnetic coordinates are respective to the apparent magnetic pole at the time the rock was magnetized. Evidence from this type of work reveals that the magnetic poles were not always in the same position that they now occupy but have wandered over the years.

Polar wandering differs from continent to continent. But the poles for a specific time in geological history can be aligned through the various continents by envisaging the continents in different positions from those they now occupy. It is in this way that the progress of continental drift can be plotted. The results of this technique agree fairly well with other drift indicators such as seafloor spreading and evidence of ancient climates shown by the rocks and their fossils. Paleomagnetism is a powerful tool in continental drift research.

Some rocks formed over short time intervals show fossil magnetic polarities 180 degrees apart. This cannot be explained by a 180 degrees rotation of a continent because there was not enough time for that. Earth's field must have undergone a switching of its magnetic polarity, as when the direction of the current in a coil is reversed. This switching is known as a reversal. Reversals mark the boundaries of periods of variable length throughout geological time when the magnetic field was of constant polarity. The dating of reversals (by studying the decay of radioactive isotopes in the rocks) provides the geologist with a paleomagnetic time scale. This can be used to date other rocks by analyzing their remanent magnetization. It was the comparison of this paleomagnetic time scale with the magnetic anomalies on the seafloor that supported the seafloor spreading hypothesis.

Many ore bodies and rocks rich in magnetic minerals have a local strong magnetic field (Fig 7). This is utilized by prospectors using sensitive instruments to detect minerals of economic value. Another method utilizes natural electrical currents that are set up between the surface and an ore body by percolating groundwater. Its interaction with the magnetic field can be measured and used to locate useful deposits.