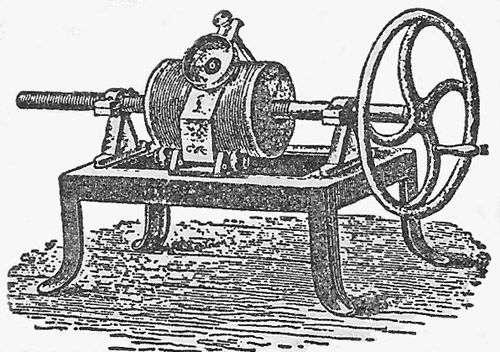 Edison's first phonograph (1877). Since the waxed cylinder was turned by hand there was, in both recording and reproducing, a difficulty in maintaining perfect regularity of speed, and hence of pitch.

The idea of recording sound by attaching a needle to a membrane vibrating in sympathy and by allowing its point to mark a plate traveling at a fixed speed dates from as early as the beginning of the nineteenth century, the object being to add to acoustical knowledge as to the differences in the vibrations evoked by sounds of various pitches and timbres. Thomas Edison in the United States, in 1877, constructed such an apparatus, with the intention that it should be used in a 'dictating machine': this he called the phonograph, and the records, on wax cylinders, he called phonograms. Here was the origin of the dictaphone, but about 20 years later (1897 or 1898) the device was being used to play music.

Emile Berlinger, a German-born American citizen, had, however, by 1888 obtained patents for important improvements – a circular plate of a shellac mixture instead of a waxed cylinder, and a horizontal motion of the needle instead of a perpendicular one (i.e. a motion making lateral impressions on the sides of a spiral track instead of the previous 'hill and dale' impressions), and his principles were in time developed and universally adopted.

So far the processes had been purely mechanical, the result of the direct action of sound vibrations. In 1925 appeared the earliest electrically made records, in which the vibrations had been received by means of a microphone and converted into electrical vibrations in a needle traveling over the recording disk. It was found that by the use of electric-made records, much more faithful reproductions could be secured, and the acoustic-made record in time disappeared from the market. The motive power of the Edison and early Berliner instruments had been supplied by a handle turned by the operator. This had been superceded by a clock-spring device, which in the more expensive instruments was, in turn, superceded by electric power obtained by plugging to the domestic electric circuit: such instruments also reproduced the sounds by electric means, reversing the process of electrical recording as described above. The new apparatus was commonly combined with one for the reception of radio broadcasting. The bugbear of short-playing records (cutting up an extended composition into record sides of under 5 minutes) was early recognized; but it was only in 1948 that (at first in the USA) all the problems inherent in trying to combine a narrower groove and slower speed without loss of high fidelity throughout the greater part of the range of audible frequencies was satisfactorily solved.

In these sound is recorded and reproduced by means of variations in the magnetic patterns of a long strip of magnetizable substance such as wire, steel tape, or (later) metallic oxide on a plastic ribbon base, were developed in Germany during the Second World War, and soon afterwards were being marketed commercially in great quantities. The same system was by 1958 in use for the recording of television programs.