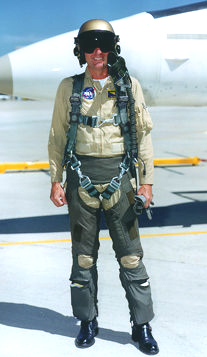 A g-suit is a tight-fitting suit that covers parts of the body below the heart and is designed to retard the flow of blood to the lower body in reaction to acceleration or deceleration; sometimes referred to as a g-suit. Bladders or other devices are used to inflate and increase body constriction as g-force increases.

The circulatory effects of high acceleration first became apparent less than two decades after the Wright brothers' seminal powered flight. During Schneider Trophy Races in the 1920s, in which military and specialized aircraft made steep turns, pilots would occasionally experience grayouts. An early documented case of g-induced loss of consciousness, or g-LOC, occurred in the pilot of a Sopwith Triplane as long ago as 1917. But the problem only became significant with the dawn of higher performance planes in World War II. In the quarter century between global conflicts, the maximum acceleration of aircraft had doubled from 4.5g to 9g.

Two medical researchers played key roles in the evolution of the anti-g during the 1930s and '40s. In 1931, physiologist Frank Cotton at the University of Sydney, Australia, devised a way of determining the center of gravity of a human body which made possible graphic recordings of the displacement of mass within the body under varying conditions of rest, respiration, posture and exercise. He later used his technique to pioneer suits that were inflated by air pressure and regulated by g-sensitive valves. At the University of Toronto, Wilbur R. Franks did similar work that eventually led to the Mark III Franks Flying Suit – the first g-suit ever used in combat. His invention gave Allied pilots a major tactical advantage that contributed to maintaining Allied air superiority throughout the war, and after 1942 the Mark III was used exclusively by American fighter pilots in the Pacific.

At the same time the g-suit was being perfected, it was realized that pilots who were able to tolerate the greatest g-forces could outmaneuver their opponents. This led to the rapid development of centrifuges.