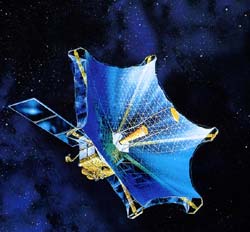 HALCA (Highly Advanced Laboratory for Communications and Astronomy) is a Japanese satellite that forms the first spaceborne element of the VSOP (VLBI Space Observatory Program), led by ISAS (Institute of Space and Astronautical Science) in collaboration with the National Astronomical Observatory of Japan. HALCA's main instrument is an 8-meter-diameter radio telescope. The satellite's highly elliptical orbit enables VLBI (Very Long Baseline Interferometry) observations on baselines up to three times longer than those achievable on Earth. Observations are made at 1.6 GHz, 5 GHz, and 22 GHz. HALCA is also known by the national name Haruka ("far away") – a reference to its large distance from Earth at apogee (the highest point of its orbit). Before launch, the satellite was called MUSES-B.