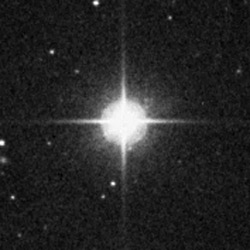 HD 10697 is a Sunlike star in the constellation Pisces around which has been found an object that is either a large exoplanet or a brown dwarf. The discovery of the companion object was announced in 2000.

HD 10697, also known as 109 Piscium, is a yellow subgiant star with a higher metallicity than that of the Sun. Its companion, HD 10697 b has mass at least 6 times that of Jupiter and perhaps as great as 38 times the mass of Jupiter. The latter estimate is based on preliminary astrometric measurements suggesting an orbital inclination of 170° (i.e., almost face-on as seen from Earth).