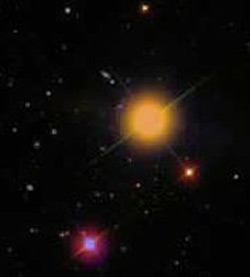 HD 98618 is the bright orange star near the center.

HD 98618 is a star in the constellation Ursa Major which is nearly identical to our Sun, and thus a prime target in the search for nearby Earth-like worlds that might host life. HD 98618 is, to within a few percent, the same size, age, and temperature, as the Sun. Its chemical composition and rotation rate are also close to the corresponding solar values. Lying at a distance of about 126 light-years, HD 98618 is bright enough in the night sky to be seen from the Northern Hemisphere using binoculars.

The only star known to be more like the Sun is 18 Scorpii, which was identified as a solar twin in 1997. 18 Scorpii and HD 98618 offer astronomers hope of finding solar systems similar to our own in the Universe. Both stars are lie in the Milky Way's disk and and orbit the center of the Galaxy at a distance of about 26,000 light-years, just like the Sun. Solar twins are unusual; less than 2% of stars in our Galaxy could be considered very similar to the Sun.