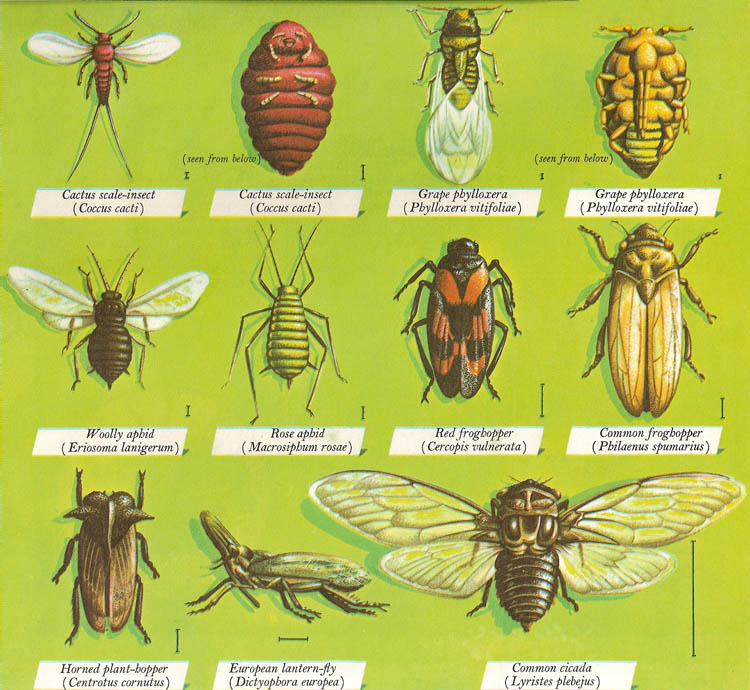 Cactus scale-insect (male and female). A native of Mexico that lives on the prickly pear cactus. The red dye cochineal is made from the dried bodies of the females. Grape phylloxera (winged and wingless forms). Part of the life of this aphid is spent on the leaves of the vine, where it produces small galls but does little harm. In the other phase of its existence it lives on the vine's roots, where it cases serious damage. Woolly aphid. A parasite of the apple. Rose aphid. Very common on roses and many other garden plants. Red froghopper. Found on sallow and alder bushes. Its bright colors are a very unusual feature among froghoppers. Common froghopper. In its young stages it protects itself in a mass of froth, which is commonly known as "cuckoo spit." Horned plant-hopper. Occurs in oak woods. European lantern-fly. A south European insect. In the tropics some of the lantern-flies are large and spectacular insects; they are not luminous. Common cicada. The most common species of cicada in the Mediterranean region. The males "sing" very loudly, but the females are silent. Red cicada. Another European species. The voice of the cicada is produced by a pair of tightly stretched membranes in cavities in the abdomen, vibrated by a powerful muscle. (Note: the bar next to each insect shows its relative size.) 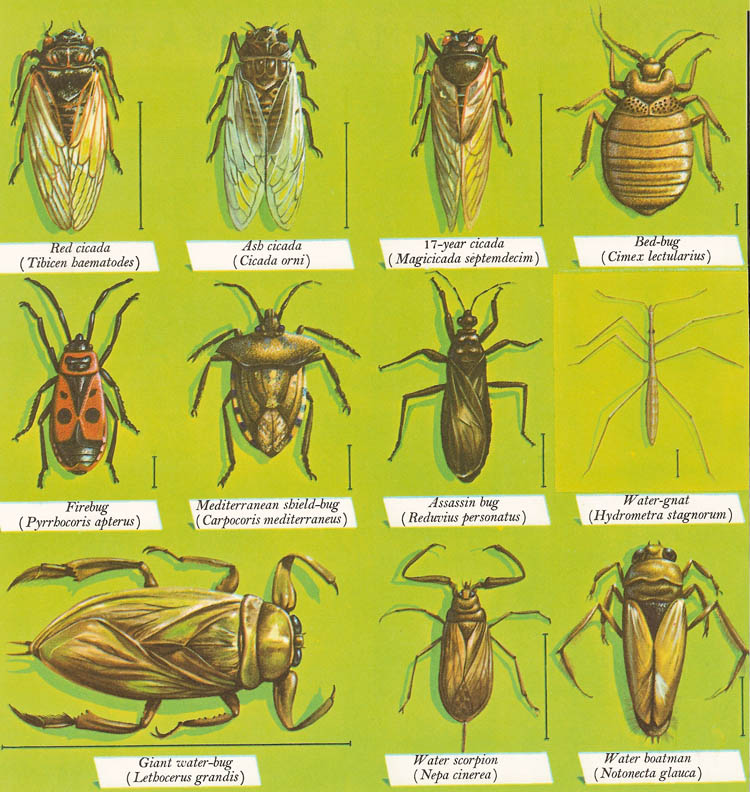 Ash cicada A southern European insect. 17-year cicada. A North American species that takes 17 years to complete its metamorphosis underground. After emerging and developing its wings the insect lives only a few weeks. Bed-bug. In spite of their keen appetite for blood, bed-bugs have been kept alive without feeding for two years. Firebug. Widespread in Europe. Mediterranean shield-bug. Shield-bugs are often quite large and have a horrible smell; in fact they are sometimes called "stink-bugs." Assassin bug. Lives on other insects and sometimes attacks people. Its bite is very painful. Water-gnat. "Skates" on the surface of water. Giant water-bug. The largest of all Hemiptera and among the largest insects. It lives in ponds in South America, preying on other insects, fish, and so on, killing them with its poisonous saliva. It flies at night and is often attracted to artificial light. Water scorpion. A common insect of muddy ponds, where it preys on other insects. It breathes air through a long tube, projecting from its tail, the tip of which is raised above the surface of the water. Water boatman. Swims upside-down in ponds and looks like a tiny boat. (Note: the bar next to each insect shows its relative size.) 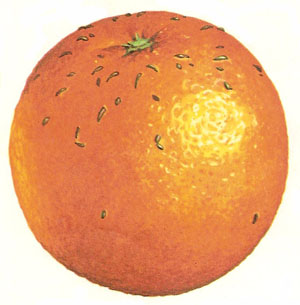 The flecks on this orange are really little scales, each covering a tiny hemipteran insect. Its name is Mytolococcus beckii, or the mussel scale insect.

Hemiptera is a diverse order of insects commonly referred to by as bugs (although we often, incorrectly, call any insect a bug). About 80,000 species are known to science.

The name Hemiptera comes from the Greek meaning "half-winged," and refers to the fact that in some (not all) of these insects each of the fore-wings is divided into two halves: a membranous tip and a thick, leathery base. The shield-bugs and water-bugs are among those which have this characteristic; in the aphids and cicadas all four wings are entirely thin and membranous. Some of the Hemiptera, including the bed-bug, are wingless.

Quite a number of hemipterans are harmful to human interest, the worst being the ones that feed on the sap of cultivated plants. They damage the plants by exhausting their vital juices, and spread serious plant diseases in a way analogous to that by which mosquitoes convey human disease.

Many Hemiptera look rather like beetles, but these two types of insects can always be distinguishing by looking closely at their mouthparts. Beetles have sideways-working biting jaws; in bugs the mouth has the form of a piercing beak or rostrum.

Close examination of the rostrum of a hemipterous insect reveals it to be made up of various parts as shown in the diagrams. The two pairs of stylets are very like fine bristles, though, as the cross-sections show, they have a definite structure. Normally they are enclosed and protected by the long, trough-shaped labium or lower lip. When the insect wants to suck the sap of a plant it presses the stylets together to make a single piercing organ and pushes their tips into the plant tissue. As the stylets go in the flexible labium frees itself from them and bends backwards in a curve, its tip resting on the surface of the plant.

The stylets are so fine and sharp that very little pressure is needed to force them in. As the section shows, when they are pressed together they form a double tube; sap is sucked up through one channel and saliva forced down through the other.

No other insects are more diverse in appearance than the Hemiptera – some, in fact, are not immediately recognizable as insects at all. Foremost among these are the scale-insects or Coccidae; in these the females are usually wingless and sometimes without legs or eyes, and they conceal themselves under scales of wax or resin secreted from their bodies. They live on the stems and leaves of plants and some of them are serious pests. Some, on the other hand, are actually useful. The Indian lac insect (Laccifera) is the source of the substance called shellac, which is used in great quantities to make varnish and for many other purposes. The red dye cochineal is made from the cactus sale-insect (Coccus cacti), a native of Mexico.

Aphids or green-flies are also hemipterans, and are among the most harmful of all plant-eating insects. They exist on a wide variety of plants and have fantastic powers of reproduction; a single female may have millions of descendants in a summer. One kind of aphid, the grape phylloxera, was accidentally brought to Europe from America in the last century and for a time threatened to wipe out the French vine-growing industry.

Among the most impressive of hemipterans are the cicadas. In the tropics and in the warmer parts of Europe and the United States they are numerous and varied. The larger cicadas look like enormous flies with two pairs of gauzy wings, and the males make the loudest sounds of any insects. The sound is produced by a tympanum (a membrane like the head of a drum) inside the body, which vibrates at high speed. Cicadas spend most of their lives as wingless nymphs underground, sucking sap from roots. One American species is known to live for 17 years before it becomes a flying insect.

Many kinds of Hemiptera spend their lives in or on the water. Among the former are the water boatmen or backswimmers (Notonecta). These are very common in ponds, and use their hind pair of legs exactly like a pair of oars – in fact the whole insect looks like a little rowing boat. A curious feature of them is that they always swim upside-down. The pond-skaters or water-striders (Gerris) are also very common, and can be scooting around on the surface of many ponds. They rest on the surface film of the water on their four hinder legs. The body is covered with a fine unwettable coat of hair, and the toes end in a tuft of hair, which prevents them from breaking through the surface film.