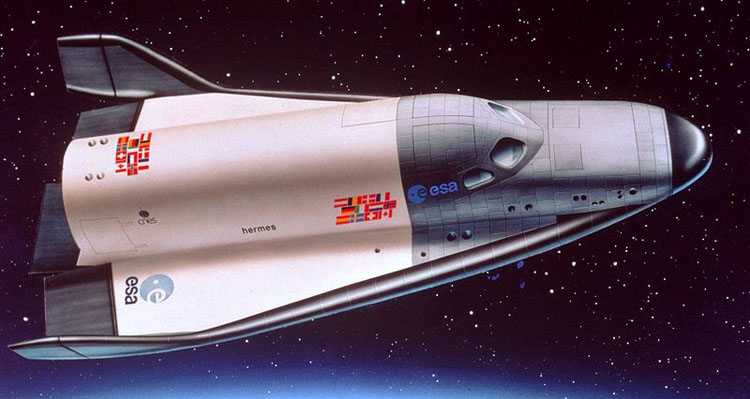 Hermes was a proposed small manned space plane for servicing European components of the International Space Station. It began as a purely French project but as development costs increased, France managed to obtain other European funding, primarily from Germany, for development of the craft.

Hermes would have provided independent European manned access to space, and the weight growth of the spacecraft during design and development was a major influence in the specification for the Ariane 5 launcher. Hermes was intended to take three astronauts to orbits of up to 800-km altitude on missions lasting 30–90 days. Payload to be returned to Earth could be contained in a small payload bay, but most experiments were to be carried in an expendable pressurized supply module, equipped with a docking port and mounted to the base of the glider.

After the Challenger disaster many safety features were added to Hermes, leading to further weight and cost growth. In an emergency the crew cab could have been separated from the remainder of the glider. Later, however, the crew escape capsule idea was abandoned and replaced by three ejection seats to save weight. Hermes was to have been launched atop an Ariane 5 by 1998, but by 1992 estimated development costs rose to DM 12 billion and the project was abandoned.