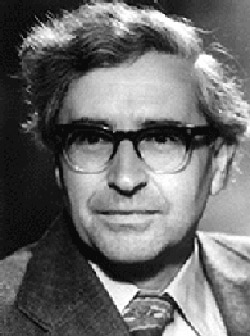 Anthony Hewish was an English radio astronomer who, in collaboration with Martin Ryle, published the first four Cambridge Radiosource Catalogues; he also developed, at Cambridge's Mullard Observatory in the 1960s, a special radio telescope that was sensitive to rapid fluctuations (scintillation) in radio sources due to disturbances in ionized gas in Earth's atmosphere, within the Solar System, and in interstellar space. Using this instrument, his student Jocelyn Bell Burnell discovered the first pulsar in 1967. For this discovery and his other work on radio astronomy, Hewish shared with Ryle the 1974 Nobel Prize in Physics.