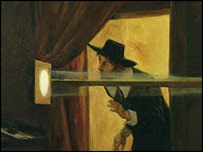 Jeremiah Horrocks was an English astronomer and clergyman who applied Kepler's laws of planetary motion to the Moon and whose observations of a transit of Venus, in 1639, are the earliest on record. Born at Toxteth, near Liverpool, Horrocks studied at Emmanuel College, Cambridge, from 1632 to 1635, at an astonishingly young age. In 1639 he was appointed to the curacy of Hoole, Lancashire, from where he made his famous observations, and studied astronomy in his spare time.

From Kepler's recently published Rudolphine Tables (1627), Horrocks worked out that a transit of Venus was due on Nov 24, 1639, at 3 pm. He prepared for the transit by directing the solar image on to a large sheet of paper in a darkened room. However, a late November afternoon in Lancashire is not the best time to observe the Sun. For Horrocks there was another problem. The predicted day was a Sunday which meant that the puritan curate could well find himself in church at the crucial moment. Horrocks was successful in observing the transit, however, and left an account of the day in his Venus in sole visa (Venus in the Face of the Sun), published posthumously in 1662. The day was cloudy but at 3.15, "as if by divine interposition," the clouds dispersed. He noted a spot of unusual magnitude on the solar disc and began to trace its path; but, he added, "she was not visible to me longer than half an hour, on account of the Sun quickly setting." With the aid of his observations Horrocks could establish the apparent diameter of Venus as 1' 12" compared with the Sun's diameter of 30', a figure much smaller than the 11' assigned by Kepler.

Before his death, at the age of only 22, Horrocks was working on an Astronomia Kepleriana (Astronomy of Kepler), and essays on comets, tides, and the Moon. Unfortunately, none of this was published until many years later. Most of his work had been lost in the chaos of the Civil War. Other material sent to a London bookseller was burnt in the Great Fire of 1666. The remainder of his papers were published by the Royal Society, being edited by John Wallis, with the title Jeremiae Horroccii opera posthuma (1678; Posthumous Works of Jeremiah Horrocks).

Isaac Newton, in his Principia, testifies to the value of Horrock's astronomical work, especially commending his lunar theory as the most ingenious of the time, adding, "and, if I mistake not, the most accurate of all." Horrocks is frequently mentioned in scientific writings of the seventeenth century. Hevelius printed the Venus in sole visa, which first appeared in Germany (1662); a translation of this work, with memoir by Whatton, appeared in London in 1859. Also, after more than two centuries of neglect in his native land, the name of Jeremiah Horrocks was engraved in marble in Westminster Abbey.