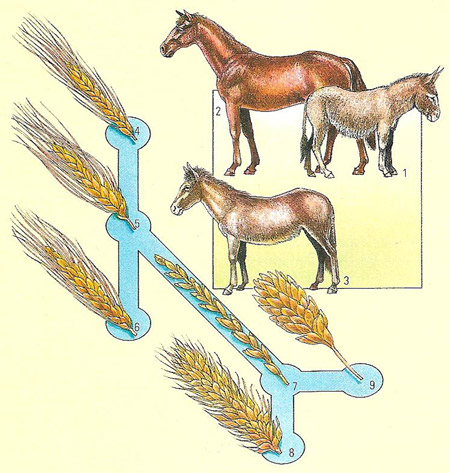 Occasionally, it is possible to interbreed two closely related species to produce a hybrid. Male donkeys (see 1 in the illustration) mated with female horses (2) produce mules (3) which are sterile because their chromosomes cannot pair during meiosis, the form of cell division required to produce sperm or eggs. Modern bread wheat (8) is a product of many years of selective breeding during which many varieties have been developed (7) (9). They have their origins in the hybridization of wild wheat and grass species to increase the number of chromosomes in the wheat cells from pairs of seven chromosomes to four sets of seven (4) and then to six sets of seven (5) and (6) which could divide properly during meiosis and breed properly.