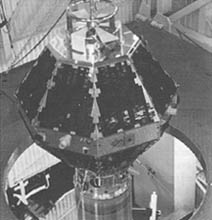 ISIS (International Satellites for Ionospheric Studies) is a cooperative satellite project of NASA and the Canadian Defence Research Board to continue and expand ionospheric experiments of the Alouette 1 topside sounder satellite. The name was devised in January 1963 by John Chapman, project manager of the Canadian team; O. E. Anderson, NASA Office of International Affairs; and other members of the topside sounder Joint Working Group. They selected "ISIS" because it was both the name of an ancient Egyptian goddess and an acronym for "International Satellites for Ionospheric Studies."

The first ISIS launch, known as ISIS-X, took place on 28 November 1965, when NASA launched Alouette 2 and Explorer 31 (also known as Direct Measurement Explorer, or DME) from the Western Test Range with a single Thor-Agena B booster. The Canadian topside sounder and the US DME were designed to complement each other's scientific data on the ionosphere. Both ISIS 1 and ISIS 2 were launched by Delta E rockets from Vandenberg Air Force Base and carried experiments to continue the cooperative investigation of the ionosphere. They took measurements over an entire 11-year solar cycle to determine how the ionosphere reacts to changes in the Sun's radiation.

In 1969 the Canadian government proposed the substitution of an experimental communications satellite for the last of the projected ISIS spacecraft (ISIS-C). The satellite was redesignated "CAS-C" – an acronym used by NASA to denote an international "Cooperative Applications Satellite." In Apr 1971 a memorandum of understanding was signed by NASA and the Canadian Department of Communication providing for the launch of CAS-C, which later was again redesignated CTS-A, an acronym for "Communications Technology Satellite." CTS-A was scheduled for 1975 launch.