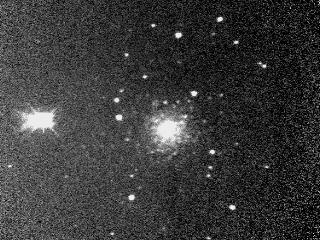 The Intergalactic Wanderer (NGC 2419) is one of the most remote globular clusters of the Milky Way Galaxy, at a distance (both from the Sun and the galactic center) of nearly 300,000 light years. Although it ranks fourth in intrinsic brightness of our galaxy's globulars, after Omega Centauri (NGC 6388) in Scorpius and M54, its remoteness – nearly double that of the Large Magellanic Cloud – leaves it faint in our sky, though within range of moderate-sized amateur telescopes. It lies in the constellation Lynx in roughly the direction of the galactic anticenter (the point in the galactic plane that lies directly opposite the galactic center).