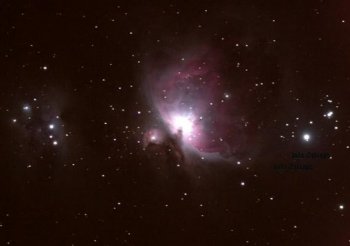 Iota Orionis is the brightest star in Orion's Sword and the eighth brightest in the constellation of Orion. Its Arabic name, Na'ir al Saif, means "the Bright One of the Sword." Iota Ori is actually a complex quadruple star dominated by a 15-solar-mass O star. At distances of 50" and 11", respectively, lie an 11th magnitude class A or F dwarf and a 7th magnitude B star, with true separations of at least 4,400 and 20,000 astronomical units (AU) and orbital periods at least 75,000 and 700,000 years. In addition, the O star has a B-type companion in a highly eccentric 29-day orbit that varies from 0.8 AU to 0.11 AU from the primary. At periastron, the centers of the stars are separated only by about 1.5 times the sum of the radii, which suggests that strong tidal forces will be generated and enhanced mass loss may be expected. Colliding stellar winds from the two giants generate powerful X-rays.

Iota Ori also has connections with two stars that lie well away from it in our sky: fourth magnitude Mu Columbae, 26° to the south, and AE Aurigae, 40° to the north. These two, almost identical in spectral type to Iota Ori, are hurtling away from each other in opposite directions at 200 km/s. They are runaway stars and were apparently thrown out of the region of the Trapezium cluster some 2.7 million years ago. According to one theory, they were once part of a pair of tightly-knit binary stars. In a close encounter between the two binaries, two of the four stars were ejected, while the remaining two – the close O-B pair of Iota Ori – remained, more or less at the site of the violent event.