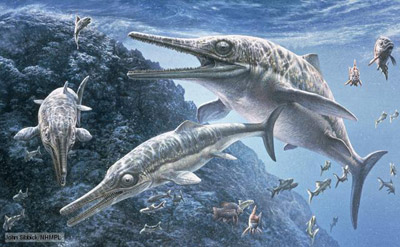 An ichthyosaur is an extinct marine reptile of the order known as ichthyosauria (Greek ichthys = fish, sauros = lizard) that lived from the Triassic to the Cretaceous periods, dying out about 90 million years ago. The ichthyosaurs were, predatory and appear almost fish-like, with streamlined bodies, limbs modified as fins, and fish-like tail. They gave birth to live young, an ability not found in most living reptiles.