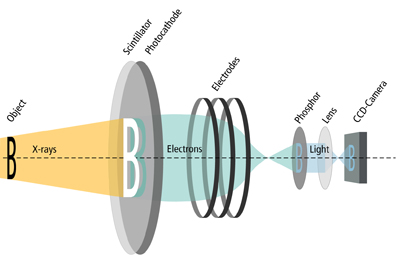 This image intensifier consists of a scintillator input window, a photocathode, electro-optics, a luminescent screen, and an output window – all contained in an evacuated enclosure. The X-rays strike the scintillating layer of the input screen, where they are transformed into optically visible light rays. The emitted photons hit a photocathode converting them to electrons. These electrons are accelerated and focussed by means of electrical fields. The electrons are then hurled against a phosphorus screen that changes the amplified electrons back into visible light, creating a smaller, very bright image against the output window. Behind the output screen, a digital CCD camera captures the image on the output window for further image processing purposes and display on a monitor. Image and caption: GE.

An image intensifier is an electronic device in which gamma rays, X-rays, or ultraviolet waves from a source can be converted into a visible image or in which the intensity of a visible image can be increased. The radiation falls onto a special surface and releases electrons that are then accelerated and focused onto a CCD camera or fluorescent screen, producing an enhanced visible image.