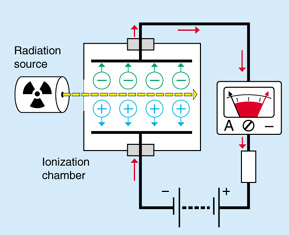 An ionization chamber is a device that detects ionizing radiation by measuring the electric current generated when radiation, such as alpha particles, beta particles, gamma rays, or X-rays, ionizes the gas in the chamber and therefore makes it electrically conductive. It contains two electrodes with a variable potential difference between them. The passage of radiation through the chamber ionizes the gas and the ions formed move towards the charged electrodes. The current thus produced, which is amplified in an associated circuitry, is proportional to the radiation intensity. A similar process is used in a Geiger counter, which detects and measures radioactivity.