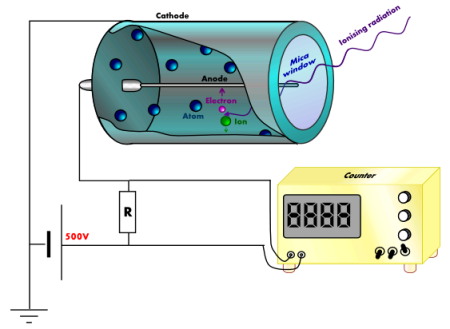 A fine-wire anode runs along the axis of a metal cylinder which has sealed insulating ends, contains a mixture of argon or neon and methane at low pressure, and acts as the cathode, the potential between them being about 1,000 V. Particles entering through a thin window cause ionization in the gas; electrons build up around the anode and a momentary drop in the inter-electrode potential occurs which appears as a voltage pulse in an associated counting circuit. The methane quenches the ionization, leaving the counter ready to detect further incoming particles.

The device is named for Hans Geiger who invented it in 1908, and Walther Müller who collaborated with Geiger in developing it further in 1928.