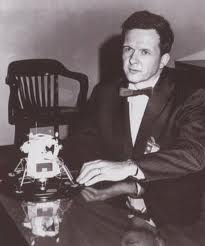 Thomas Kelly was an American engineer with Grumman Aircraft (now Northrop Grumman) who led the team that designed and built the Apollo Lunar Module (LM). Kelly helped developed the lunar-orbit rendezvous concept used by Apollo, then spearheaded Grumman's effort at Bethpage, New York, to realize the vehicle that would land a dozen astronauts on the Moon and, in the case of Apollo 13, serve as a lifeboat for the safe return of the stricken crew.

A native of Brooklyn, Kelly earned a BS in mechanical engineering from Cornell University (1951) and a MS in the same field from Columbia University (1956). After graduating from Cornell, he joined Grumman as a propulsion engineer and later did the same job at Wright-Patterson Air Force Base, Ohio, when he was called up for military service. He worked as a space propulsion engineer for Lockheed Martin's Missiles and Space Division in 1958–59, then returned to Grumman, where he stayed until his retirement in 1992. His experiences in building the LM are recounted in his book, Moon Lander: How We Developed the Apollo Lander Module (2001).