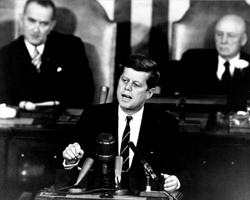 John F. Kennedy was an American President who served from 1961 to 1963. While on the presidential campaign trail Kennedy attacked incumbent Eisenhower's record in international relations, taking a Cold Warrior position on a supposed "missile gap" (which turned out to be false) wherein the United States supposedly lagged far behind the Soviet Union in ICBM (intercontinental ballistic missile) technology. On May 25, 1961, President Kennedy announced to the nation the goal of sending an American to the Moon before the end of the decade. In his historic message, delivered before a joint session of the Congress, he declared, "... I believe this nation should commit itself to achieving the goal, before this decade is out, of landing a man on the Moon and returning him safely to the Earth." The human spaceflight imperative was a direct outgrowth of it; Projects Mercury (in its latter stages), Gemini, and Apollo were designed to execute it. Kennedy's goal was achieved when astronaut Neil Armstrong became the first human to set foot upon the Moon at 10:56 pm EDT, July 20, 1969.