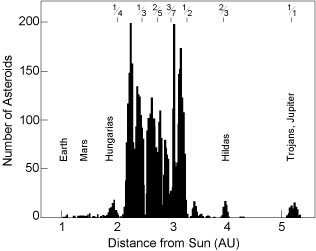 The Kirkwood gaps are regions in the main asteroid belt that have been cleared of asteroids by the perturbing effects of Jupiter. They are named after Daniel Kirkwood who discovered them.

The Kirkwood gaps are due to resonances with Jupiter's orbital period. For example, an asteroid with a semi-major axis of 3.3 AU makes two circuits around the Sun in the time it takes Jupiter to make one and is thus said to be in a 2:1 resonance orbit with Jupiter. Once every two orbits, Jupiter and such an asteroid would be in the same relative positions, so that the asteroid would experience a force in a fixed direction. Repeated applications of this force would eventually change the semimajor axes of asteroids in such orbits, creating gaps at that distance.

Gaps occur at 4:1, 7:2, 3:1, 5:2, 7:3, and 2:1 resonances, while concentrations occur at the 3:2 (Hilda group), 4:3 (Thule), and 1:1 (Trojan group) resonances. The presence of secular resonances complicates the situation, particularly at the inner edges of the belt. An adequate explanation of why some resonances produce gaps and others produce concentrations has yet to be found.