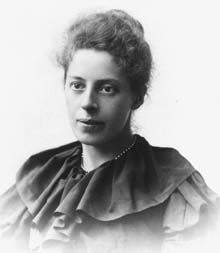 Dorothea Klumpke-Roberts was an American astronomer who became the first woman to make astronomical observations from a balloon. Born in San Francisco, she and her family moved to Europe, where she was educated and spent 50 years of her life. After earning a bachelor's degree at the Sorbonne, she joined the Paris Observatory and worked on photographic star charts, then became the first woman to obtain a doctorate from the Sorbonne (1893), for a thesis on Saturn's rings. In 1899, when France, Germany, and Russia launched hot air balloons to observe the Leonids meteor shower, Klumpke was invited to ride in one. In 1901, she married a Welsh businessman and amateur astronomer, Isaac Roberts (1829–1904), 30 years her senior, and they moved to London. Three years later, she was widowed and went to live with her sister in France where she continued her astronomical work. In 1929, to commemorate the centenary of her husband's birth, she published an astronomical atlas based on his work. Her views about the importance of women's role in astronomy remained firm and she wrote and lectured on the subject in order to encourage greater female participation in the science. She finally moved back to her native San Francisco in 1930 where, despite ill health, she continued to take an active part in astronomy, her house became a gathering place for scientists, artists and musicians.