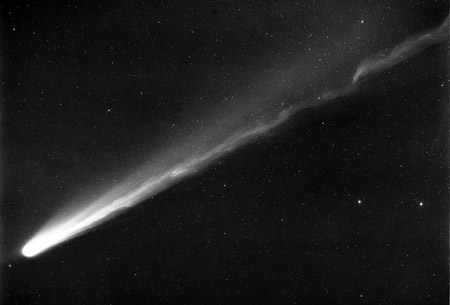 Comet Kohoutek (C/1973 E1) is a long-period comet best-remembered by the public for being such a letdown. It was discovered near Jupiter's orbit, on Mar 18, 1973, by the Czech astronomer Lubos Kohoutek (1935–), and, based on its unusual brightness at that distance, was predicted to become a splendid naked-eye sight at perihelion. However, although it failed to brighten as much as advertised, it was intensively studied and of importance scientifically. Its best showing in the night sky was after perihelion when, though it had dimmed to fourth magnitude, it sported a tail up to 25° long together with an antitail. Its orbit was found to be hyperbolic, meaning that Kohoutek is on an escape course from the solar system, never to be seen again.