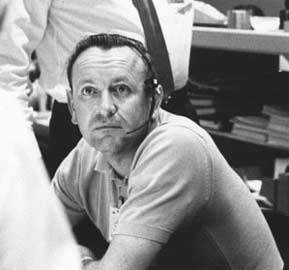 Christopher Kraft was a NASA flight director involved with many of the early American manned spaceflights. He received a BS in aeronautical engineering from Virginia Polytechnic University in 1944 and joined the Langley Aeronautical Laboratory of NACA (National Advisory Committee for Aeronautics) the following year. In 1958, while still at Langley, he became a member of the Space Task Group developing Project Mercury and moved with the Group to Houston in 1962. He was flight director for all of the Mercury and many of the Gemini missions and directed the design of Mission Control at the Manned Spacecraft Center (MSC), redesignated the Johnson Space Center in 1973. Kraft moved up to become director of flight operations at MSC through the entire Apollo program, then director of Johnson Space Center until his retirement in 1982. Since then he has remained active as an aerospace consultant and, in 2001, published an autobiography, Flight: My Life in Mission Control.