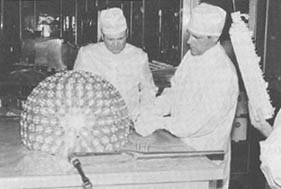 Lageos (Laser Geodynamics Satellite) 1 and 2 are solid, spherical, 60-cm-diameter passive satellites that provide reference points for laser ranging experiments. Lageos carries an array of 426 prisms that reflect ground-based laser beams back to their source from which ever direction they arrived. By measuring the time between transmission of the beam and reception of the reflected signal, stations can measure the distance between themselves and the satellite to an accuracy of 1–3 cm. Long term data sets can be used to monitor the motion of Earth's tectonic plates, measure Earth's gravitational field, measure the wobble in Earth's rotational axis, and better determine the length of an Earth day.

Lageos 1 was developed by NASA and placed into a high inclination orbit to permit viewing by ground stations around the world. Lageos 2 was a joint program between NASA and the Italian space agency, which built the satellite using Lageos 1 specifications and materials provided by NASA. Lageos 2's orbit was chosen to provide more coverage of seismically active areas, such as the Mediterranean and California, and to help scientists understand irregularities noted in the motion of Lageos 1. Lageos 1 contains a message plaque addressed to human and other beings of the far future with maps of Earth from three different eras – 268 million years in the past, the present day, and 8 million years in the future (the satellite's estimated decay date).